"Karimnagar Will Be Renamed To...": Yogi Adityanath Promises In Telangana

Yogi Adityanath had said they will change the name of the state capital Hyderabad to 'Bhagyanagar'. 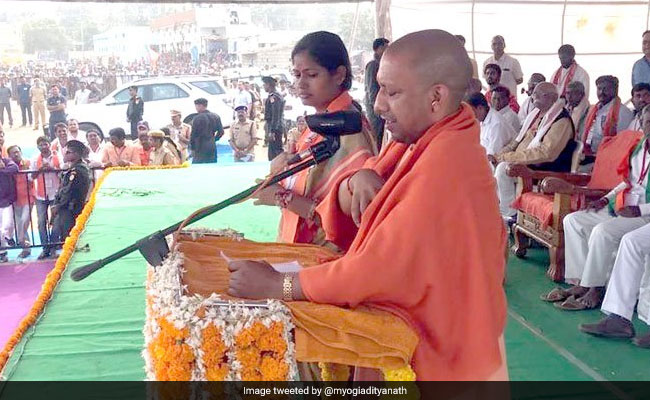 Uttar Pradesh Chief Minister Yogi Adityanath has promised that his party, the BJP, will change the name of Karimnagar district if it is voted to power in Telangana.

"If BJP comes to power in Telangana then BJP will work for renaming Karimnagar to 'Karipuram' and respect your sentiments," he said on Wednesday at a rally in the poll-bound state.

The leader, who was mocked on social media with memes after he changed the names of several UP cities, recently said at a rally that if his party wins the polls in Telangana, it will change the name of the state capital Hyderabad to 'Bhagyanagar'.

"If Hyderabad has to be transformed into 'Bhagyanagar' then I call upon you to support BJP to form the government (in Telangana)", he had said.

Former BJP lawmaker from Telangana, T Raja Singh Lodh, had on several occasions said his party will rename a number of Telangana cities.

The BJP government in Uttar Pradesh has renamed several cities that, the party says, were renamed in the Mughal era. The state government changed the name of Allahabad to Prayagraj, Faizabad to Ayodhya and Mughalsarai Junction to Pt Deen Dhayal Upadhyay junction.

There have been demands from some BJP leaders to change the names of other iconic cities.

BJP lawmaker Jagan Prasad Garg had demanded that Agra be renamed as "Agravan" or "Agrawal".

"Agra has no meaning. You check the name Agra anywhere, what relevance does it have? Earlier there used to be a lot of forests here. And people from the Agarwal community used to live here. So the name should be Agra-van or Agra-wal," Mr Garg had said.

The opposition had slammed the Uttar Pradesh government for its decision to change the names of several cities. But the sharpest attack had come from BJP's ally Om Prakash Rajbhar. "BJP changed the names of Mughalsarai and Faizabad. They say they were named after the Mughals. They have a national spokesperson Shahnawaz Hussain, Union Minister Mukhtar Abbas Naqvi, Uttar Pradesh Minister Mohsin Raza - three Muslim faces of the BJP. They should change their names first," he had said.