Yogi Adityanath said that four cities of the state are currently using metro trains and quick efforts were being carried out to provide metro services in other cities. 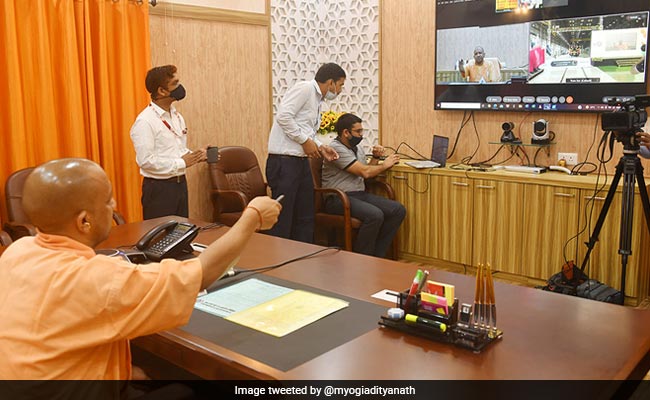 He added that while earlier India used to stay dependent on western companies for transportation projects, it is now advancing in fulfilling Prime Minister Narendra Modi's vision of a self-reliant India.

Praising the efforts of UPMRC during Covid, he said, "We have seen how UP Metro Rail Corporation worked during the Covid crisis. They worked tirelessly and even Covid could not be an obstacle for them."

He said that four cities of the state are currently using metro trains and quick efforts were being carried out to provide metro services in other cities.

"Metro is a necessity today. Lucknow, Ghaziabad, Noida and Greater Noida are currently using the metro. We are working quickly on the Kanpur and Agra Metro. I hope that by November 30, we will be able to dedicate it to the nation and have Prime Minister Narendra Modi inaugurate it. Efforts are underway to bring metro trains to Gorakhpur, Prayagraj, Jhansi, Varanasi and Meerut too. Detailed Project Reports (DPR) for these have been either sent or are in its final stages," Mr Adityanath said.

The construction of the Agra Metro project was inaugurated by Prime Minister Narendra Modi in December 2020. The Agra Metro will connect major tourist attractions like Taj Mahal, Agra Fort, Sikandra with the city's other transport nodes like railway station and bus stands.

On the other hand, civil construction works of Kanpur Metro's priority corridor from IIT to Motijheel was awarded last year and is being executed at a brisk pace since the re-opening of the state after Covid-19 lockdown.