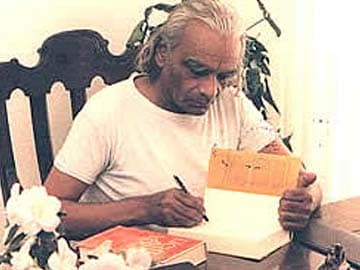 Pune: World-renowned yoga guru and founder of the Iyengar School of Yoga B K S Iyengar died early this morning at a hospital in Pune.

The 95-year-old Mr Iyengar had been ailing since some time and was admitted to a private hospital a week back. He was put on dialysis after his condition worsened two days back.

Mr Iyengar, honoured with Padma Vibhushan, is survived by a son and daughter.

The legendary yoga guru was admitted to a city hospital on August 12 following complaints of acute breathlessness and palpitation, Dr Deepali Mande, who attended on him, told PTI.

"He did not want to be admitted to hospital even though he was unwell at home for almost three weeks. Iyengar had a cardiac (ailment) history. His condition subsequently worsened leading to renal failure after which he was put on dialysis," she said.

During the last phase, Mr Iyengar was feeling drowsy, she said.

"He was not keen on having any food," the doctor added.

Mr Iyengar was considered one of the foremost yoga teachers in the world and had written many books on yoga practice and philosophy including 'Light on Yoga', 'Light on Pranayama', and 'Light on the Yoga Sutras of Patanjali'.

I am deeply saddened to know about Yogacharya BKS Iyengar's demise & offer my condolences to his followers all over the world.

"Generations will remember Shri BKS Iyengar as a fine Guru, scholar & a stalwart who brought Yoga into the lives of many across the world," the Prime Minister added in his tweet.

An eminent exponent of yoga as enunciated in the ancient "Patanjali Sutra", Mr Iyengar was credited with spreading the practice of yoga to about 60 countries which he visited carrying the message from the east to the west.

The yogacharya, who was active till the end through his Iyengar Institute of Yoga, had a large following of disciples within and outside the country.

Hailed as a "modern rishi", Mr Iyengar set up over 100 branches of his institute in different countries.

Born in 1918 at Bellur in Karnataka, he came to Pune in Maharashtra in 1937 and after spreading knowledge of yoga, set up his own 'Yogavidya' institute in 1975 which he later expanded in various branches across the country and abroad.

The internationally acclaimed yoga guru had taught 'yogasanas' to many prominent personalities along with commoners.

Among those whom he introduced to yoga were eminent socialist leader Jayprakash Narayan, famous philosopher J Krishnamurti and world renowned violinist Yehudi Menuhin.

He also authored 14 books on yoga techniques, which became known as 'Iyengar Yoga'. His books were translated into 17 languages.

All branches of the Iyengar Yoga Institute in the city were closed today following the news of his demise.

Promoted
Listen to the latest songs, only on JioSaavn.com
The cremation is scheduled to be held in the afternoon.

Noted industrialist Rajiv Bajaj said Iyengar was not just a yogacharya, but he was a "life guru" who always imparted security and comfort to his disciples with a smiling face.