The yogis performed asanas on pink yoga mats wearing T-shirts that had the Yoga Day logo printed on them.

England: About 30 yoga teachers, hand-picked from all over the world, performed yoga today at sunrise at Britain's Stonehenge, a Unesco World Heritage site. An exclusive peak into the inner circle of the Stonehenge was arranged by India Tourism, UK to promote yoga in the lead up to the Yoga Day on June 21.

"Stonehenge is the UK's most powerful and popular historic location. It's a magical place. What can be a better place to perform and promote yoga where history and folklore suggest that the stones emit positive energy and are termed as healing stones," said Dinesh Patnaik, Deputy High Commissioner of India in London.

The team of yogis met at 2 am in London to travel to Stonehenge to reach before sunrise. From surya namaskar and vrikshasana to shivaasana, British officials, too, joined in impromptu during an hour of yoga at Stonehenge.

Promoted
Listen to the latest songs, only on JioSaavn.com
"I have learned many forms of yoga, but I specialize in Hatha Yoga which is easily picked up by most. My students feel enriched with each class of yoga and I feel proud to promote calmness and fitness through yoga," said Thailand's Anong Vu. 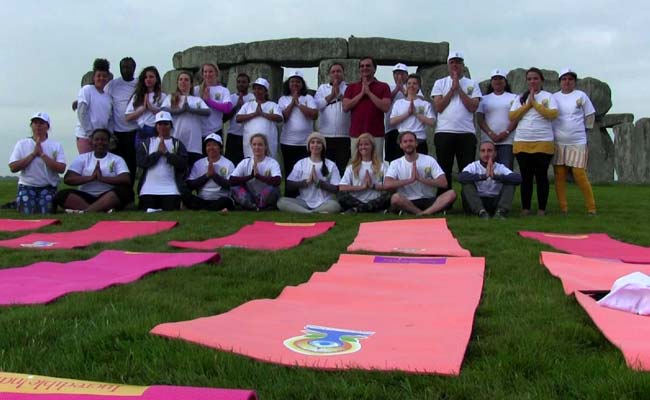 "Yoga has helped me concentrate, be mindful of my behaviour, stay fit and above all learn to live," said Stewart Walt from London.

The yogis from across the world performed asanas with ease on pink yoga mats wearing T-shirts that had the International Day of Yoga logo printed on them.