Yoga Day 2020: Yoga Day To Be Marked On Digital Platforms Amid COVID-19 Crisis

Yoga Day will go digital for the first time since June 21, 2015, when it began to be celebrated annually across the world, coinciding with the Summer Solstice each year. 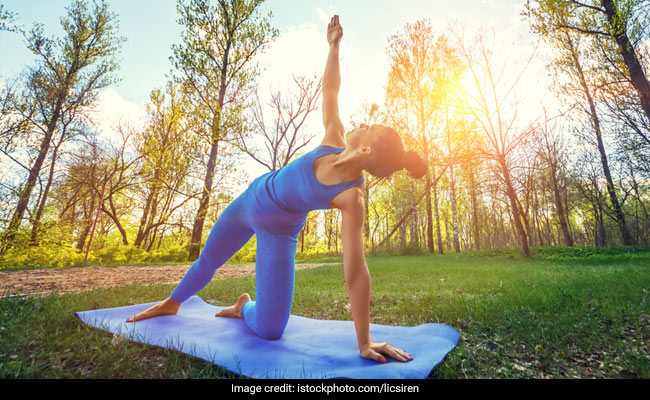 This year's theme is ''Yoga at Home and Yoga with Family''. (Representational)

With the shadow of the COVID-19 pandemic looming large, International Day of Yoga on Sunday will be celebrated on digital media platforms sans mass gatherings and Prime Minister Narendra Modi's message would be the highlight of the occasion.

Yoga Day will go digital for the first time since June 21, 2015, when it began to be celebrated annually across the world, coinciding with the Summer Solstice each year.

This year's theme is ''Yoga at Home and Yoga with Family'' and people will be able to join the celebrations virtually at 7 am on June 21.

The Indian missions abroad are trying to reach out to the people through digital media as well as through the network of institutions which support yoga, officials said.

The Ministry of AYUSH had planned to hold a grand event in Leh, but cancelled it due to the pandemic.

On December 11, 2014, the United Nations General Assembly declared June 21 as ''International Day of Yoga'', months after PM Modi had proposed the idea.

A message from Prime Minister Modi will be the highlight of the International Day of Yoga which will be observed on electronic and digital platforms on June 21, the AYUSH ministry said on Thursday.

"Due to the current global health emergency due to the COVID-19 outbreak, the focus this year is less on such celebrations and more on people performing Yoga at their respective homes with participation of the entire family," the ministry said.

The prime minister's remarks will be televised at 6.30 am, a statement by the Ministry of Ayurveda, Yoga & Naturopathy, Unani, Siddha and Homoeopathy (AYUSH) said.

As has been the practice in International Day of Yoga (IDY) observation, the PM's message will be followed by a live demonstration of a 45-minute Common Yoga Protocol (CYP) by a team from Morarji Desai National Institute of Yoga.

The CYP drill has been designed keeping in mind people of different age groups and of varied walks of life, the ministry had said in its statement.

"Yoga is found to be especially relevant in the pandemic situation, since its practice leads to both physical and mental wellbeing, and increases the individual''s ability to fight diseases," it said.

PM Modi on Thursday had urged people, in a video message, to observe the day from the confines of their homes due to the COVID-19 pandemic.

"This year, the event will highlight the utility of yoga for individuals, to develop immunity to combat the global pandemic and strengthen the community in managing some of the significant aspects of this crisis," Vinay Sahasrabuddhe, president, Indian Council for Cultural Relations (ICCR) had said earlier this month.

The ministry and ICCR, through the ''My Life - My Yoga'' video blogging competition which was launched by the prime minister on May 31, has sought to raise awareness about yoga and inspire people to prepare for and become active participants in the observation of IDY 2020.

The contest has two legs -- the first one consisting of an international video blogging contest wherein the winners will be picked within a country. This will be followed by global prize winners who will be selected from different countries.

To enter the contest, participants were required to upload a three-minute video of three yogic practices ('kriya'', 'asana'', 'pranayama'', 'bandha'' or 'mudra''), including a short video message/description on how the said yogic practices influenced their lives.

This made it a total of six categories in all. For India contestants, prizes worth Rs 1 lakh, Rs 50,000 and Rs 25,000 will be given for first, second and third positions within each of the categories.

The Indian missions abroad will give away prizes in each country.

At the global level, cash prizes worth USD 2,500, USD 1,500 and USD 1,000 along with a trophy and certificate will be given to those ranking first, second and third, respectively.

The blogging contest which has started on various digital platforms such as MyGov.gov.in will end on Sunday. The jury will then later collectively decide and announce the names of the winners.

Yoga programmes are organaised across the globe by Indian missions every year, but this year will be different. Several missions are organizing digital events to mark the occasion.

Thousands of yoga enthusiasts in Texas and adjoining US states are all set to roll out their mats to bend and twist their bodies in complex postures from the safety of their homes with acclaimed yoga guru Baba Ramdev on livestream to mark the International Day of Yoga on Sunday.