Yes, will play bigger role but 'two bosses' will decide when: Rahul Gandhi to NDTV 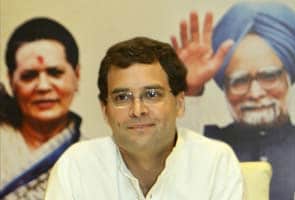 New Delhi: After voting for the next President of India at parliament, Rahul Gandhi told NDTV that he will play a "more pro-active role in the party and the government."

"The decision has been taken, the timing is upto the leadership," he said, adding that when he starts playing his new role depends on his "two bosses." One of them - his mother, Congress president Sonia Gandhi - was by his side as he offered this limited insight into his political future. The other boss he was referring to is the Prime Minister.

On Wednesday, Mrs Gandhi told NDTV that "Rahul alone" would have to decide whether to take on a bigger role.  He is currently the General Secretary of the Congress.  Recently, senior Congress leaders like Salman Khurshid and Digvijaya Singh have said the party is waiting for Mr Gandhi to officially accept a larger role.  Mr Singh told NDTV on Thursday evening that he accepts that Mr Gandhi "has to come out more often" and share his opinions; he also agreed that "interaction with media should be far more than what it is at the moment."  He said that while Mr Gandhi may not air his views on crucial policies, "he has a very definite idea on most issues...he reads a lot and formulates his own ideas...he has a very inquisitive mind."

In a controversial interview last week, Mr Khurshid had said about Mr Gandhi, "We have only seen cameos of his thought and ideas like democratising elections to the Youth Congress. But he has not weaved all of this into a grand announcement. This is a period of waiting."

Whether that state of suspense is about to end for his party could depend on a cabinet reshuffle that sources expect before August 8, when the Monsoon Session of Parliament begins. Pranab Mukherjee, who will almost certainly be declared President of India on Sunday, was both Finance Minister and Leader of the Lok Sabha till he quit the government to run for Rashtrapati Bhawan. The Prime Minister took over the Finance portfolio. Sources say that the reshuffle could see Sushil Kumar Shinde taking over as Lok Sabha leader, with Jairam Ramesh replacing him as Power Minister. That would allow Mr Gandhi to take over Mr Ramesh's Rural Development Ministry. The department's influence on "aam admi" policies could make it an attractive choice for Mr Gandhi, not least because it comes with a  massive 76,000 crore budget, second only to that of the Defence Ministry.

However, others in the party say it's not necessary that a cabinet position is what Mr Gandhi will choose. Congress leader Digvijaya Singh stressed that if it were upto him, he would like to see Mr Gandhi adopting a bigger role "within the organisation."  A position as Working President for him has been a point of speculation both within and outside the party, but this could undermine the Prime Minister. Mr Singh also said that though Sonia Gandhi "is not keeping too well," there is no question of her being replaced as President. He said she will lead the campaign for the Congress for 2014, but added that Mr Gandhi would play a larger role.

Promoted
Listen to the latest songs, only on JioSaavn.com
The BJP reacted to Mr Gandhi's statement by pointing to the larger role he took on with poor results. "It is obvious that there is no inner party democracy in the Congress," said spokesperson Nirmala Sitaraman today, adding, "We have seen him testing his skills in Bihar, UP."

Mr Gandhi accepted the blame for his party's embarrassing performance in the recent UP elections - the Congress placed a poor fourth, despite projecting him heavily as its leader. Mr Gandhi, his mother and his sister Priyanka had campaigned heavily in the election that was eventually swept by the Samjawadi Party, courtesy its 39-year-old leader Akhilesh Yadav.
Comments
Rahul Gandhi