Yes Bank: A customer he needed to withdraw over Rs 50,000 in case but is helpless as the RBI has capped the withdrawal limit. 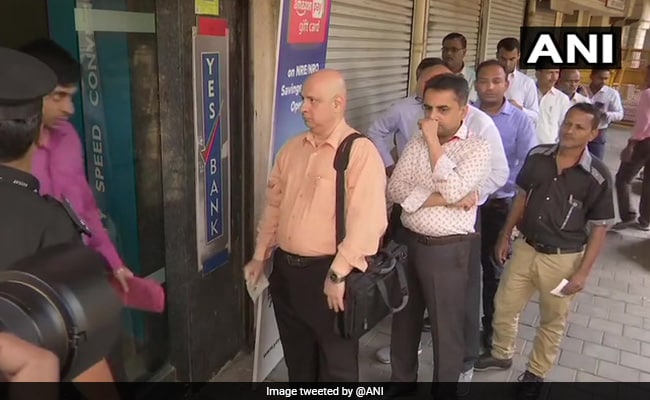 Yes Bank: Customers said that the bank had not given any prior information.

After Reserve Bank of India (RBI) on Thursday imposed a month-long moratorium on Yes Bank citing "serious deterioration in its financial position", capping the withdrawal limit at Rs 50,000, depositors in Mumbai rushed to the ATMs for withdrawing cash.

However, the customers claimed that the bank had not given any prior information about it while many complained that the ATMs have run out of cash.

During the period of moratorium, Yes Bank Limited shall not, without the permission in writing of the Reserve Bank of India, make, in the aggregate, payment to a depositor of a sum exceeding Rs. 50,000 lying to his credit, in any savings, current or any other deposit account.

Nand Kumar, a Yes Bank customer told ANI that he wanted to withdraw cash but the "ATM ran out of cash" as many people have withdrawn their money.

"Banks are considered trustworthy by a common man but from now onwards people will start loosing their trust. RBI takes such action whenever it wants. What is the crime of common men? Bank did not inform us anything," said Mr Kumar.

"Bank staff and other members have always urged people to deposit more money. We used to receive some messages on the phones regarding the same but the Yes bank has conspired and mislead the people," he added.

Another customer said that he needed to withdraw over Rs 50,000 in cash but is helpless as the RBI has capped the withdrawal limit.

"I have an account in Yes Bank. The withdrawal has been capped at Rs 50,000, this is wrong. We will be facing problem as Holi is around. The bank has also not informed us about anything. I have Rs 2 lakh in my account and I need around Rs 1 lakh to 1.5 lakh. A similar kind of situation occurred with PMC recently. Our request from the government is that our money should be cleared and returned at earliest," he added.

RBI on Thursday said a "moratorium" has been imposed on Yes Bank stressing that the bank's financial capability has undergone a steady decline largely due to the inability of the bank to raise capital.

"The financial position of Yes Bank Ltd. (the bank) has undergone a steady decline largely due to inability of the bank to raise capital to address potential loan losses and resultant downgrades, triggering invocation of bond covenants by investors, and withdrawal of deposits," RBI said in a statement on Thursday.

"The bank has also experienced serious governance issues and practices in the recent years which have led to steady decline of the bank. The Reserve Bank has been in constant engagement with the bank''s management to find ways to strengthen its balance sheet and liquidity," the statement read.