No Party Except BJP Will Push For Citizenship Bill: Yashwant Sinha

Except the BJP, all the people told me that they won't let the Bill pass in the Upper house at any cost," former Finance Minister Yashwant Sinha said 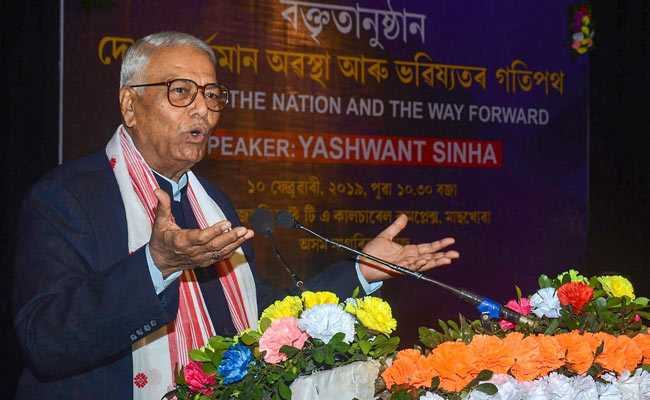 Former Union Minister Yashwant Sinha today said the Citizenship (Amendment) Bill 2016 will not be passed in the Rajya Sabha even as he insisted that the Modi government is not going to come to power for a second time.

The veteran politician, who quit the BJP last year, said this in Guwahati while delivering a talk organised by a citizens' forum.

"Before coming here, I met lots of people. Except the BJP, all the people told me that they won't let the Bill pass in the Upper house at any cost. So, I don't think the government will dare to pass the Bill by force in the Rajya Sabha," the former BJP leader said.

"Sometime they do it... In case of important bills, sometimes they are passed by voting amid ruckus in the House. But considering the importance of the Citizenship Bill, I don't think they will dare to pass the Bill amid ruckus," he said.

"The ongoing session of Parliament will be over in two days and this is the last Parliament session of this government. I would also like to tell you with confidence that this government is not coming to power for a second time. So there is nothing to worry. If there are still worries, please wait for two days, after February 13, we all can breathe easy," Mr Sinha said.

He dubbed as "incorrect from all angles" the bill which seeks to provide citizenship to six minority groups from Afghanistan, Pakistan and Bangladesh.

"This Bill should not be passed because it is incorrect from all angles -- legal, constitutional, moral. And from the point of view of Assam Accord it is incorrect. This Bill is also against the ethos of the country. There is nothing like merit in this bill," the former Finance Minister said.