Mamata Banerjee said that her dispensation has regularised 213 refugee colonies over the last two years, and issued a total of 2,79,000 pattas. 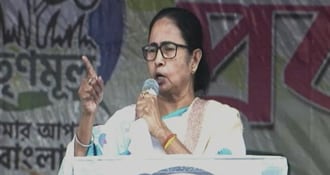 West Bengal Chief Minister Mamata Banerjee on Thursday asserted that she would not allow "forcible displacement" of any refugee from land owned by central government organisations, amid reports that eviction notices have been put up at several such places.

She said that her government would hand over pattas (land certificates) to all such refugees.

"We have got information that at some places in Bankura and Habra, central government organisations have put up eviction notices. But our government would not allow any such thing. We will give them (refugees) dalil (official document) in accordance with their merit," Ms Banerjee said at the state secretariat, following a cabinet meeting.

The chief minister said that her dispensation has regularised 213 refugee colonies over the last two years, and issued a total of 2,79,000 pattas.

"We are clearly stating that such evictions will not be allowed. Refugees who have been staying on those estates for several years will receive the pattas. Matuas (Bangladeshi refugees) have already been given pattas, and those who have not received them so far, will get them soon," she said.

She stated that her cabinet has also given its nod to grant freehold rights to the unauthorised inhabitants of Kolkata Municipal Corporation's ward number 109.

"Not a single colony will be left out. We are doing it for everyone, be it those living on state government land, on private property or on land belonging to central government organisations, like the railways," the TMC supremo underlined.

All refugee colonies in the state, including those in the city's Jadavpur, Behala, Dhakuria, Sonarpur, Ballygunge, and Beleghata areas, will get such rights, she said.

The cabinet, overwhelmed by the response to the ruling dispensation's flagship programme ''Duare Sarkar'' (government at doorsteps), has agreed to extend its timeline for another phase to ensure that more and more people get to avail the benefits of state-run schemes, Ms Banerjee said.

The drive, which has touched lives of at least two crore people so far, will be renewed for its fifth phase for 14 days, starting January 27.

The fourth phase is scheduled to end on January 25.

"With so many people taking interest in the programme, and considering the fact that some have come to know about the initiative only later, we have decided to extend it for phase-5, which will start from January 27 and continue till February 8," Ms Banerjee explained.

The cabinet also sanctioned old age and widow pension for at least 15 lakh people, who had applied for it, she said, adding that the disbursement process will start from Friday.

The CM, following the cabinet meeting, inaugurated an initiative, under which her government will transfer Rs 10,000 to bank accounts of the nine lakh students of Class 12 in government schools and madrasas for purchasing smartphones, computers or tablets.

"The money would be transferred to designated bank accounts in seven days. Students can purchase tablet computers or smartphones of their choice and continue their online education," she said after interacting with some of them over a virtual platform.

Every student receiving the assistance will also get a letter undersigned by her, Ms Banerjee said.