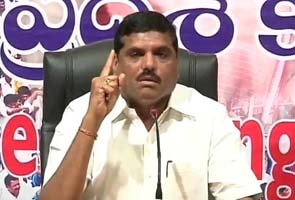 Hyderabad: Across the country, protesters and activists are demanding better safety for women after a young medical student was gang-raped in a moving bus in Delhi a week ago.

But in Andhra Pradesh, the head of the Congress offered a shocking assessment. "We also condemn the incident. But we should consider the circumstances. They should also think that they should not go in a private bus at night. We say we got freedom at midnight but doesn't mean we can roam around freely at midnight,'' said Botsa Satyanarayana. Incidentally, he is also the state transport minister and controls the whole fleet of Road Transport Corporation buses.

After a backlash of virulent criticism, he apologised and said his remarks had been misunderstood.

The student who was savagely assaulted is in hospital in critical condition. Her case has motivated thousands of students and others to rally for more police patrols on Delhi's streets at night, swift trials in sexual assault cases, and safer public transport in the capital.

Promoted
Listen to the latest songs, only on JioSaavn.com
The government has asked a judicial committee headed by former Supreme Court judge JS Verma to evaluate the response of officials after the student's attack, and to suggest changes to laws for sexual assault crimes.