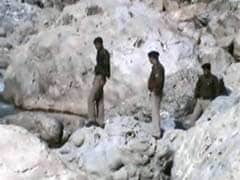 The spot in Uttarkashi where the body was found.

Kolkata: The body of a 27-year-old tourist from Delhi, who was raped and murdered three weeks ago during a visit to Uttarakhand, is believed to have been fished out of river Yamuna in Uttarkashi today.

The woman had gone there on a Diwali holiday with her fiance Avijit Paul. The two had been robbed and strangled to death on October 23. Mr Paul's body was found on October 30.

The alleged killers - the driver of their vehicle in Uttarakhand and his three friends - are in police net. During questioning, they said the motive was robbery. One of the men admitted to raping the woman before murdering her, the police said.

On October 23, the couple had hired a car at Chakrata and had gone to see the Tiger Falls, 30 km away. On the way, the cab driver had picked up three of his friends. On their way back, the men stopped the car, dragged the couple out, robbed Mr Paul and strangled him. The woman was raped and murdered. The assailants then threw the two bodies off a cliff into the river Yamuna.

The body was recovered by a joint search party of the police and SDRF from the river about 2 km beyond Damta in Uttarkashi district around 10.30 am, reported the news agency Press Trust of India, quoting Uttarkashi Superintendent of Police JR Joshi. "We are very sure that the body belongs to the woman tourist from Delhi," PTI quoted him as saying.

The woman was from West Bengal's Kalyani. She was working as an arts teacher at a school in Gurgaon. Mr Paul was a painter. His family lives in Dum Dum, in Kolkata.

Promoted
Listen to the latest songs, only on JioSaavn.com
The woman's brother is believed to be on his way to a hospital in Purola, where the body has been kept.

Mr Paul's friend Sudipto said, "We didn't even get to see his body. The police cremated it before we could reach. We had to identify him from photographs of the dead body. This is very unfortunate".
Comments
Uttarakhand tourist murderUttarakhandUttarKashi