With Statue Of Unity, India Has Exhibited Its Capability To World: PM Modi

Speaking at a campaign rally ahead of November 28 assembly elections in Madhya Pradesh, PM Modi said the Swachh Bharat cleanliness campaign has given a boost to influx of foreign tourists in India. 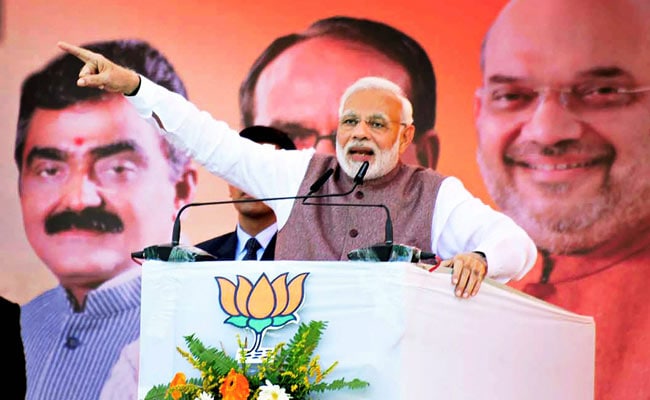 Prime Minister Narendra Modi said on Sunday that by erecting the Statue of Unity, India has once again exhibited its capability to the world.

Speaking at a campaign rally ahead of November 28 assembly elections in Madhya Pradesh, PM Modi said the Swachh Bharat cleanliness campaign has given a boost to influx of foreign tourists in India.

"For many years after Independence we did not do anything which could attract foreign tourists. We repeatedly spoke of things our ancestors had created, like the Taj Mahal and Sun Temple of Konark," the prime minister said.

"For the first time after independence, by erecting the Statue of Unity, the world's biggest statue, we have shown the world India's capability," he said, referring to the statue of Sardar Vallabhbhai Patel, inaugurated in Gujarat's Narmada district last month.

"In days to come India will make a place for itself in world tourism," he added.

"India has lots of things to offer to the world, its cuisines, rich culture of thousands of years, languages, but tourism remained neglected after Independence," he added.

"The filth in the lanes and by lanes (of tourist towns) discouraged foreign tourists from revisiting. But with the Swachh Bharat Abhiyan, influx from abroad has increased.

The tourism industry generates maximum employment with minimum investment, and the poor, those who sell tea, pakoda, who drive taxi and auto rickshaw, reap the benefits, the prime minister said.

He accused the Congress of playing divisive politics to rule the state for 55 years.

"Congress neither has any policy, intention, nor a leader...its leader is confused," he said.

As part of the Smart City project, Rs 23,000 crore will be spent on development of seven cities in Madhya Pradesh including Indore over five years, PM Modi said.

"Let the naamdar (Rahul Gandhi) write down on a piece of paper how many zeroes are there in Rs 23,000 crore. He will get confused," he said.

On Congress leader Digvijay Singh's remark that "his party loses votes if he campaigns", PM Modi said it was the Congress's decision to keep the former chief minister away from canvassing so that it can hide "sins" of 55-year rule.

"If he (Digvijay) campaigns, people will remember the poor infrastructure like road, power during his rule in the state," PM Modi said.

Sanitation facilities have reached 92 per cent of people from 34 per cent in 2014, PM Modi said, adding, "Achieving this would have taken 12 generations (of Gandhi family)."

He also said though BJP is in power in MP for 15 years, Chief Minister Shivraj Singh Chouhan effectively got only four-and-a-half years to work as the UPA government was biased against BJP-ruled states.

"There was a remote controlled government run by 'madam' in New Delhi....they stopped the works of BJP governments. I was Gujarat chief minister, when the work of Sardar Sarovar Dam was stopped, farmers started facing problems, and their crops started drying up. I had to start agitating, I spent ten years fighting Delhi," he said.

On Rahul Gandhi's promise about making the state a hub of mobile phone manufacturing, PM Modi said, "There is no mention of mobile manufacturing in their manifesto. This shows that even his party doesn't take him seriously."