With Gift Of Mangoes, Bihar Minister Makes Plea To "Save The Environment"

The Bihar government has been taken to task in this assembly session for reacting slowly as an AES outbreak killed 164 children, a majority of whom died in Muzaffarpur district 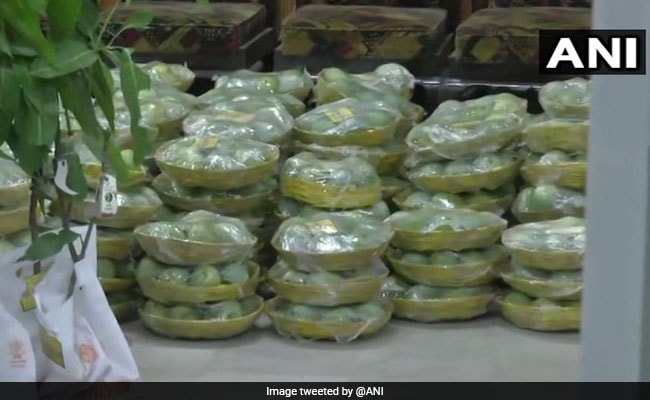 The Bihar government, which has faced criticism over its handling of the Acute Encephalitis Syndrome (AES) outbreak that killed more than 160 children in less than a month, may have found a novel way to reach out to opposition lawmakers - by distributing baskets full of mangoes to lawmakers in the state. According to Agriculture Minister Rem Kumar, the step was taken with environmental concerns in mind.

"As Bihar is known for mangoes, we decided to distribute seven mangoes each to MLAs and MLCs. Along with that we have distributed mango saplings with a motto - save the environment," Mr Kumar told reporters.

The Bihar government has been taken to task in this assembly session for reacting slowly as an AES outbreak killed 164 children, a majority of whom died in Muzaffarpur district.

"Mangoes distributing initiative is an unwelcoming step of the government. BJP and JD-U leader will eat mangoes. But we will keep raising our voice against their inefficiency," RJD leader Rabri Devi said.

The agriculture minister tried to play down the issue and said it did not mean his government was not concentrating on the medical crisis engulfing his state.

"We are not distributing sweets. It is a fruit for which Bihar is famous. We are concerned about the issues of encephalitis and taking all measure to deal with it," he said.

The AES crisis highlighted the condition of medical infrastructure in the state, which scored poorly in a report - "Healthy States, Progressive India" - released last month by the NITI Aayog. Bihar ranked 20 among big states, with only Uttar Pradesh faring worse.

In June a mango festival in Lucknow celebrated different varieties of the fruit, including a 'Modi Mango'.

With around 700 varieties of mangoes, including the famous Dashhari, Chausa, Hosnahara, Mallika, Tommy Atkins, Kesar and Langda, the 'Modi mango', which weighs around 450 grams and has been named after Prime Minister Narendra Modi, grabbed eyeballs.