Winter Session Of Parliament Live: The two houses have witnessed repeated disruptions since the start of Winter Session of Parliament on December 15 over PM Modi's remarks against the former Prime Minister with the Congress vociferously raising the issue.

Winter session of Parliament: In the Lok Sabha GST Amendment bill was passed.

New Delhi: Opposition ruckus today forced the adjournment of Lok Sabha and Rajya Sabha proceedings several times as members of the opposition vociferously raised the issue of union minister Ananthkumar Hegde's controversial remarks on secularism and the Constitution. In Lok Sabha, TRS members, demanding a separate high court for Telangana, trooped into the Well. They were followed by those from the Congress who raised the Hegde issue. Some other members raised concerns over the treatment meted out to the family members of Kulbhushan Jadhav by Pakistan.

The two houses have witnessed repeated disruptions since the start of Winter Session of Parliament on December 15 over PM Modi's remarks against the former Prime Minister during election campaign in Gujarat with the Congress vociferously raising the issue. While Rajya Sabha has seen daily adjournments, the Congress has been staging protests and walk out in the Lok Sabha.

Here are the highlights from the Winter session of Parliament:

Read: Amid Anger Over Pak Treatment Of Jadhavs, Government Statement Tomorrow
The government will make a statement in parliament tomorrow on the treatment of Kulbhushan Jadhav's wife and mother in Pakistan, said Foreign Minister Sushma Swaraj, amid outrage and condemnation in both houses.
Dec 27, 2017 15:17 (IST)
In Rajya Sabha, Congress leader Ghulam Nabi Azad protests comments of Anantkumar Hegde, says, the minister who doesn't have faith in the constitution, has no right to be a minister.

Statement by @AzadGhulamNabi in the Rajya Sabha: The minister who doesn't have faith in the Constitution of India, has no right to be a minister. pic.twitter.com/Ylrh7bJZBm

Dec 27, 2017 15:12 (IST)
Statement in Lok Sabha by Mallikarjun Kharge condemning Pakistan for the mistreatment of the wife and mother of Kulbhushan Jadhav.

Statement in Lok Sabha by @MallikarjunINC condemning Pakistan for the mistreatment of the wife and mother of Kulbhushan Jadhav. pic.twitter.com/VWJU9lgG7p

Dec 27, 2017 15:02 (IST)
Samajwadi Party lawmaker Naresh Agrawal writes to Rajya Sabha Chairman Venkaiah Naidu about Kulbhushan Jadhav, says, "the ill-treatment meted out to Indian prisoners lodged in Pakistani jails is known to all. In spite of knowing this Indian government has not taken stern steps, this is a very serious matter".

Thank leader of the house for clarification on what has been issue of contention. I, on behalf of my party, say that we disassociate from any comments made by any member during elections that may have hurt PM's dignity,also we don't want any such thing to be said in future, says Congress leader Ghulam Nabi Azad after Finance Minister Arun Jaitley's statement in Rajya Sabha.
Dec 27, 2017 14:23 (IST)
Lok Sabha adjourned till 2.45 pm amid chaos.
Dec 27, 2017 14:18 (IST)
Prime Minister Narendra Modi in his speeches didn't question, nor meant to question the commitment to this nation of either former PM Manmohan Singh or Former Vice-President Hamid Ansari, any such perception is erroneous, we hold these leaders in high esteem, as well as their commitment to India, says Finance Minister Arun Jaitley in Rajya Sabha.
Earlier in the day, Congress gave a suspension of business notice in Rajya Sabha under rule 267 over PM Modi's statement against Former PM Manmohan Singh and others during Gujarat election campaign.
Dec 27, 2017 14:12 (IST)
Whatever Anantkumar Hegde said, Mallikarjun Kharge is trying to distort it. BR Ambedkar is the father of the constitution and we request the opposition to not disrupt and take part in proceedings, says Parliamentary Affairs Minister Ananth Kumar in Lok Sabha.
Dec 27, 2017 14:09 (IST)
Session resumes in both the houses of the Parliament amid chaos over comments made by Anantkumar Hegde.
Dec 27, 2017 13:54 (IST) In Rajya Sabha, Chairman M Venkaiah Naidu  at noon sought to take up the Question Hour, but CPI leader D Raja beseeched him saying that as vice president he was custodian of the Constitution which was given to the country by B R Ambedkar and Anantkumar Hegde had made "very objectionable comments". He claimed even Ambedkar was opposed to the idea of India being a 'Hindu Rashtra'.
Another opposition member asserted that someone who had taken oath on the Constitution and then abused it had no right to continue being a minister.
As members belonging to several opposition parties including the Congress, DMK, TMC and others, protested, Mr Naidu said he had asked the government to explain its stand on the issue.
After union minister Vijay Goel asserted that the government did not favour the views expressed by Mr Hegde, Mr Naidu tried to resume the
Question Hour proceedings.
He then asked Leader of House Arun Jaitley to speak, but a large number of opposition members continued their protest, shouting slogans and seeking action against Hegde. Left with no option, Mr Naidu adjourned the proceedings till 2 PM.
Dec 27, 2017 13:47 (IST)
Its "Diplomatic Failure": Veerappa Moily On Mistreatment Of Kulbhushan Jadhav's Family In Pakistan
Speaking outside the Parliament, Congress leader Veerappa Moily said that the manner in which Kulbhushan Jadhav's family was treated in Pakistan was inhuman. He added that the foreign ministry should have ensured what kind of protocol is arranged for family. "It's a diplomatic failure on the part of our MEA and country. External Affairs Minister or PM should have taken up the matter with their counterparts in Pakistan," he said.
Dec 27, 2017 13:25 (IST) 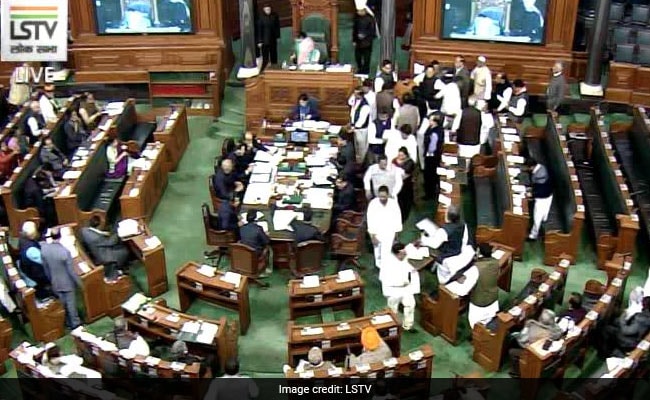 During the Zero Hour in Lok Sabha, members of various political parties, including the Congress, Shiv Sena, Trinamool Congress and AIADMK, strongly protested the way Kulbhushan Jadhav's family members were treated by Pakistan authorities when they had gone there to meet Jadhav, who is languishing in a Pakistani prison.
While strongly criticising the happenings, Congress leader in the Lok Sabha Mallikarjun Kharge demanded that Jadhav should be brought back. Shiv Sena's Arvind Sawant also raised the issue and said India should not keep silent in the matter.
Describing Pakistan as "hypocritical", Trinamool Congress leader Saugata Roy said the incident should be criticised and demanded that Swaraj should speak on the issue. Condemning the incident, AIADMK M Thambidurai said asking a woman to remove her 'mangal sutra' is an insult to the country.
Dec 27, 2017 13:08 (IST) 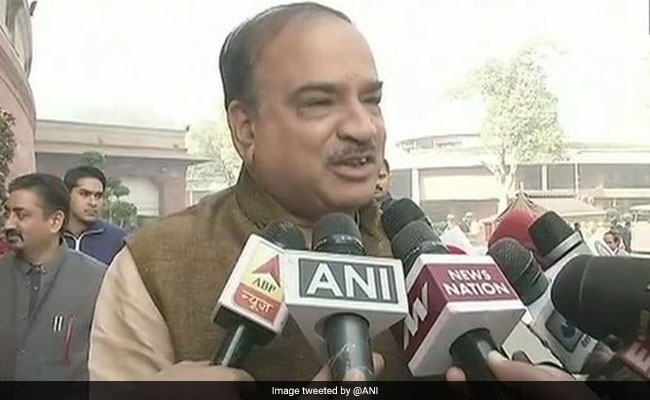 Sushma Swaraj To Speak In Parliament On Kulbhushan Jadhav's Meet With Mother, Wife
External Affairs Minister Sushma Swaraj to give a statement in Rajya Sabha tomorrow at 11 am on Kulbhushan Jadhav's meet with his wife and mother in Pakistan's Islamabad, reports news agency ANI. She will also speak on the issue at 12 noon in Lok Sabha.
Kulbhushan Jadhav, the Indian sentenced to death in Pakistan, met his wife and mother on Monday, more than a year after he was arrested by the Pakistani army and accused of spying.
Pakistan's foreign office portrayed the brief meeting - coming after months of waiting on the family's visa application - as a grand gesture on the birthday of Muhammad Ali Jinnah. India has called the exercise "lacking in any credibility" and said the "overall atmosphere of the meeting was intimidating".
Yesterday, after coming back from Pakistan, Mr Jadhav's wife and mother met Ms Swaraj. A number of officials from the foreign ministry, including foreign secretary S Jaishankar, attended the three-hour meeting.
Dec 27, 2017 10:24 (IST)
Apart from the triple talaq bill, which will be introduced in in the Lok Sabha on Thursday, other bills on the government's agenda this week include The High Court and the Supreme Court Judges (Salaries and Condition of Services) Amendment Bill, 2017 and The Representation of the People's (Amendment) Bill, 2017.
Dec 27, 2017 09:50 (IST)
Congress Gives Adjournment Notice In Lok Sabha
Congress has given an adjournment motion notice in Lok Sabha over Union Minister Ananth Kumar Hegde's remarks about the constitution. Mr Hegde is in the centre of another controversy after he said that his party, the ruling BJP, will "soon change the Constitution," which mentions the word "secular". He attacked what he called a "new fad where people project themselves as secular".
The 49-year-old minister was speaking at a function in Kukanur of Koppal district in Karnataka when he urged people to "claim with pride that they are Muslim, Christian, Lingayat, Brahmin, or a Hindu," adding, "Those who, without knowing about their parental blood, call themselves secular, they don't have their own identity...They don't know about their parentage, but they are intellectuals."
He has also said, "Some people say the Constitution says secular and you must accept it. We will respect the Constitution, but the Constitution has changed several times and it will change in the future too. We are here to change the Constitution and we'll change it."
Dec 27, 2017 09:24 (IST)
Congress Gives Suspension Of Business Notice In Rajya Sabha
Congress has given suspension of business notice in Rajya Sabha under rule 267 over PM Modi's statement against Former PM Manmohan Singh and others, reports news agency ANI.
Dec 27, 2017 08:38 (IST)
BJP's Parliamentary Party To Meet Tomorrow; Issues Whip For Lok Sabha MPs
BJP's Parliamentary party to meet tomorrow morning at 9:30 am. The party has issued whip for its Lok Sabha MPs to remain present in the house tomorrow and day after. The triple talaq bill will be introduced in the lower house tomorrow.
Dec 27, 2017 08:28 (IST)
The Goods and Services Tax (Compensation to States) Amendment Bill, 2017 may come up for passage in the Lok Sabha today. The bill would replace an ordinance wherein tax rates on various motor vehicles were hiked to a maximum of 25 per cent under the Goods and Services Tax (GST). Finance Minister Arun Jaitley introduced the Bill last week.
Dec 27, 2017 07:57 (IST)

Top Court Already Banned Triple Talaq, No Need To Criminalise: CPM
Mr Salim said when Supreme Court has already banned triple talaq, there is no need to bring such a bill. "As far as demanding a ban on the practice of triple talaq is concerned, we have been raising this issue ever since politicians like Narendra Modi had not even heard of the term triple talaq. But we recognise that divorce is a civil matter and there is no need to criminalise it," he said.
Dec 27, 2017 07:51 (IST)
The triple talaq bill will be introduced in in the Lok Sabha on Thursday and some repercussions of this may be seen today as well with CPM conveying its intent to oppose the bill. CPM leader Mohammed Salim said that Modi government's move to bring a bill criminalising instant triple talaq was unwarranted and politically motivated.