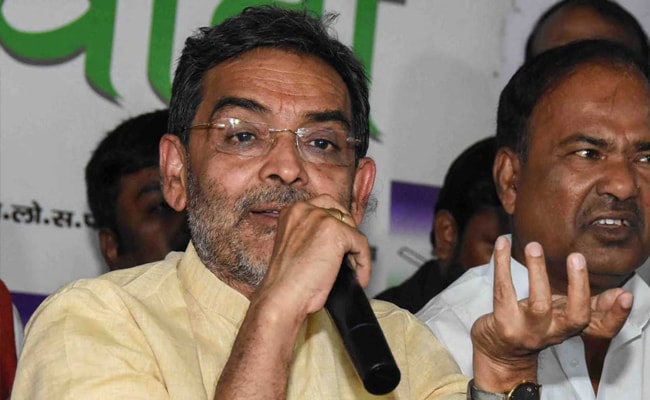 Union minister and RLSP chief Upendra Kushwaha today said he would apprise BJP chief Amit Shah of the "humiliation" he had suffered at the hands of Bihar Chief Minister and JD(U) supremo Nitish Kumar.

Mr Kushwaha said he would also request Mr Shah to clear the "confusion" over seat-sharing among the National Democratic Alliance (NDA) constituents in the state at the earliest.

Before leaving for New Delhi, the Rashtriya Lok Samata Party (RLSP) chief told reporters at Patna airport that he had sought an appointment with Mr Shah.

"During my meeting with Shah, I intend to raise both the issues -- seat sharing as well as the humiliation by Nitish Kumar," Mr Kushwaha said.

He has been maintaining that his party has a tie-up only with the BJP and not with the JD(U).

Mr Kushwaha is unhappy with Nitish Kumar for his alleged "neech" statement. It was made at a television programme about a week ago when the JD(U) chief had refused to comment on reports that the RLSP might end up getting fewer seats than it had fought and won in the 2014 Lok Sabha polls.

Mr Kushwaha took exception to Mr Kumar's response that commenting on the issue would "lower the standard of the discourse".

RLSP supporters took out a protest march in the city on Saturday, demanding an apology from the chief minister.

Mr Kushwaha met Ram Vilas Paswan, the president of NDA constituent Lok Janshakti Party (LJP), and said that the latter concurred with his view that seat-sharing talks should be held at the earliest, involving all the coalition partners.

He has reportedly been peeved after the BJP and the Janata Dal (United) decided to contest an equal number of seats in the 2019 Lok Sabha election in Bihar.

The state sends 40 members to Parliament and after the BJP-JD(U) deal, there is speculation that this would mean fewer seats for other allies like the RLSP and the LJP.

"I also discussed the issue of seat-sharing with Paswan. He too was of the opinion that formal talks on seat-sharing, taking all NDA constituents in Bihar on board, ought to be held at the earliest in order to dispel confusion," the RLSP chief said.