Coronavirus Migrants Crisis: Lakhs of migrants were left stranded by the nationwide lockdown

Hundreds of migrants are queuing up outside coronavirus screening centres across Delhi, despite a vicious heat wave and searing temperatures, desperately hoping to be declared COVID-19 free and get a seat on special trains to their home states.

Left without jobs or money, men, pregnant women and children stand waiting, hoping and praying for hours, even as temperatures near 50 degrees Celsius in parts of the city, only to be told that the "shramik" trains will not run.

At a screening centre in Delhi's West Vinod Nagar, for example, migrants waiting for 24 hours were told there will be no trains to Bihar for the next three days.

"We will die like this... because of hunger. I have been here since 11 am yesterday (Tuesday). We haven't even been given water and the police keep threatening us," Karishma Devi, 29, told NDTV. Karishma Devi, who is eight months pregnant, is looking for a train to Bihar's Saharsa after her husband, an AC technician, and she were thrown out of their home over non-payment of rent.

"I have also been here since 11 am yesterday, after we got a late night message that our train will leave in the morning. But we saw the message late and, by the time we reached, were told the train had left. We have stayed all night but got only of water and biscuits," Ashok, who wants to return to Bihar's Madhubhani district, said. 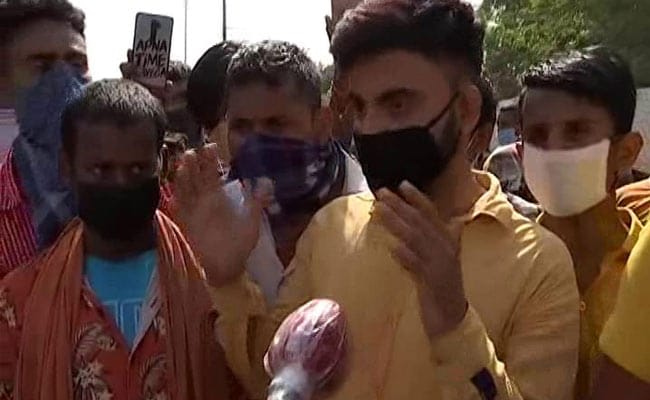 "I have been here since 4 pm yesterday and only got water and biscuits. We have stayed overnight. We got a message that there is a train, so we came. But now we're told there will be no trains for three days," 25-year-old Shaqib, who also wants to return to Saharsa in Bihar, told NDTV.

Another stranded migrant, left furious by the chaos and apparent disinclination of the government to help, lashed out at Bihar Chief Minister Nitish Kumar: "I spent all night waiting... my mother died at home. I want to ask Nitish Kumar and the Bihar government - What are you doing for Biharis?"

Last week Nitish Kumar appealed to all migrant labourers looking to return home to not panic and trust his government. A statement by the administration told the migrants it was taking every possible measures at its disposal to bring them home.

According to protocol laid down by the Railways, migrants registered for travel on "shramik" trains are informed of the date and time of departure. On the morning of departure, they are to report to a screening centre and, if they clear the thermal test, are issued a certificate before being transported to the station.

However, as centre and state squabble over the running of the "shramik" trains, with the central government alleging states are blocking the running of the trains, it is the helpless migrants who seem to get caught in the middle.

In Maharashtra, for example, as Chief Minister Uddhav Thackeray and Railways Minister Piyush Goyal wrangled over the state not providing enough information, thousands of migrants gathered outside Mumbai railway stations on Tuesday.