Will Ask For Details Of Spending On PM Modi's Rallies: Mamata Banerjee

Addressing back-to-back rallies in East Midnapore, Mamata Banerjee said, "We will ask the Election Commission (EC) to keep an account of the spendings in the prime minister's public meetings. If the EC can seek details of expenditure from others, why not from him?" 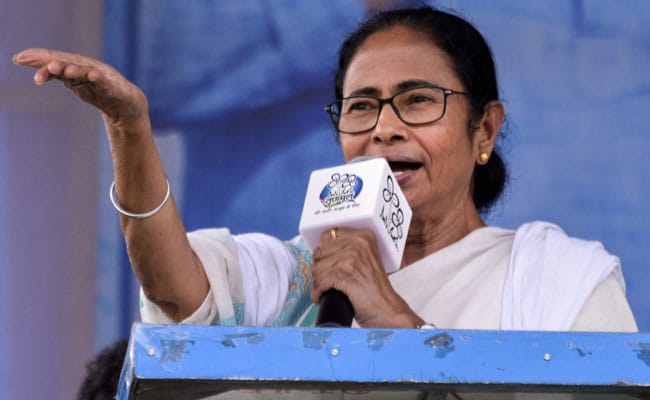 The chief minister also alleged that BJPis doling out thousands of rupees to lure people to its rallies.

Accusing the BJP of doling out money to buy votes in the general election, West Bengal Chief Minister and TMC supremo Mamata Banerjee Sunday said her party will request the poll panel to seek an account of expenditure at Prime Minister Narendra Modi's rallies.

Ms Banerjee also demanded that PM Modi's candidature from Varanasi be cancelled, claiming that he has written "does not know" on many counts in his affidavit.

Addressing back-to-back rallies in East Midnapore, she said, "We will ask the Election Commission (EC) to keep an account of the spendings in the prime minister's public meetings. If the EC can seek details of expenditure from others, why not from him?"

The chief minister also alleged that BJP is doling out thousands of rupees to lure people to its rallies, while also buying votes.

Taking her diatribe against the prime minister to his home front, she claimed that "all throughout his life, PM Modi never respected his mother or his wife".

"You shy away from giving your wife her due respect, what respect will you give to the people?" the CM said.

Maintaining that she has seen PM Modi's affidavit in his nomination papers, Ms Banerjee said, "The PM has written that he does not know about his wife's movable and immovable assets. I don''t like making such comments, but the level he has stooped to forced me to speak out," the TMC boss said.

She urged the Election Commission to carry out an investigation into the spendings of PM Modi's "colourful rally" in the holy town of Varanasi before filing his nomination.

"This election is not (a test) for Mamata Banerjee, but for you (Modi). It is time for you to answer what you have done in five years," she said, insisting that the prime minister was busy touring the world during his tenure.

Maintaining that PM Modi is worse than Muhammed bin Tughlaq, the 14th century sultan of Delhi known for his whims, she said that the sudden demonetisation of high-value currency notes in November 2016 caused immense hardship to people, be it a housewife, farmer, worker or a small businessman.

Ms Banerjee, whose aversion to communism and everything associated with it including the colour red is well-known, for once sought refuge in Karl Marx to deride the BJP.

Drawing from Marx's famous statement "religion is the opium of the masses", she said, "The BJP is using religion as opium to divert the attention of people from the non-performance of its government at the Centre.

She, however, did not mince her words when it came to targeting the Left parties in the state.

"Those who wore red shirts earlier are now donning saffron kurtas in West Bengal," the TMC chief said, indicating that many BJP workers in the state are former CPI(M) cadres.The CM also iterated that PM Modi will ensure that there was no further election in the country if re-elected to power.

She charged the poll panel with "doing the bidding of the BJP".

Ms Banerjee, whose party was accused of unleashing a reign of terror during the panchayat polls, insisted that it was her partymen who were killed during the elections in 2018.

"In Bengal, there is a democratically elected dispensation, but the BJP is trying to run a parallel government here. A retired officer is dictating terms to the serving officers, this is unconstitutional," she said, referring to the two special observers appointed by the EC to oversee polls in West Bengal.