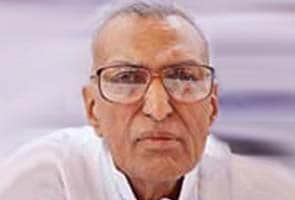 New Delhi: During the Emergency that was declared by Prime Minister Indira Gandhi in 1975, many of her ministers and party-men were competing to display total loyalty to her.

A cable sent by US diplomats in India to their home office in Washington illustrates the sycophancy of then Defence Minister Bansi Lal.

Promoted
Listen to the latest songs, only on JioSaavn.com
It notes that Bansi Lal declared at a public rally in Haryana that he was "loyal to Mrs Gandhi personally and not to the office of Prime Minister. He said he would remain loyal to her all his life. All his strength came from the 'blessings' of Mrs Gandhi." (Read the cable)

Bansi Lal's unabashed declarations stumped the US embassy in New Delhi, which said in the cable, "Aside from raising questions about his oath of office to the constitution and President, the Defense Minister's remarks may well also strike a somewhat sour note for the officers of the Indian Army. Embassy and DAO officers will be watching for any indication of annoyance or concern within the Indian military to Bansi Lal's suggestion that his orders to them may relate more directly to Mrs Gandhi's personal interests than to those of the state."