The four-year-old son of Colonel Santosh Babu, Anirudh, held by his mother, was a part of the heartbreaking rituals carried out with full military honours.

Thousands attended the funeral today in Telangana of Colonel Bikkumalla Santosh Babu, who died for his country in the deadly clash with China at the Galwan Valley in Ladakh on Monday, and chanted "Bharat Mata Ki Jai". The four-year-old son of Colonel Santosh Babu, Anirudh, held by his mother, was a part of the heartbreaking rituals carried out with full military honours.

As the Colonel's father performed the last rites, the little boy was carried by his mother around the funeral pyre. In images that moved the nation, Anirudh, a mask covering his face, was seen saluting his father. People gathered in large numbers to pay their last respects. Colonel Santosh Babu's wife breaks down at his funeral.

Chants of "Santosh Babu amar rahe (long live Santosh Babu)" and "Vande Mataram" rose up as a huge crowd of people, many in masks, joined the funeral of a man they would not have heard of two days ago. People showered flowers from their balconies on the army vehicle carrying the soldier's body in a coffin wrapped in the national flag.

Shops and establishments in Suryapet town remained closed as a mark of respect. After the rituals, the Army gave a gun salute to the soldier who was killed in the line of duty. 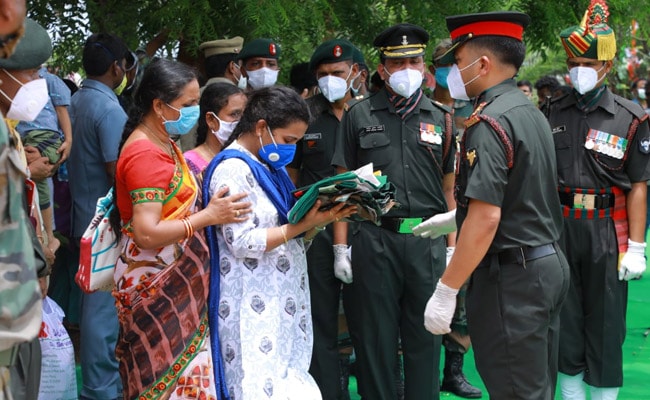 Colonel Santosh Babu, who studied in a Sainik School and trained in the National Defence Academy, Khadakwasla, was commissioned into the Bihar Regiment from Indian Military Academy, Dehradun and went on to complete the prestigious Defence Service Staff Course from Wellington before taking over the command of his battalion.