Why This Orthopedic Surgeon Insists Women Should 'Sit Like A Man'

Crossing legs when sitting or standing with weight on one side can leave women more at risk of musculoskeletal problems. 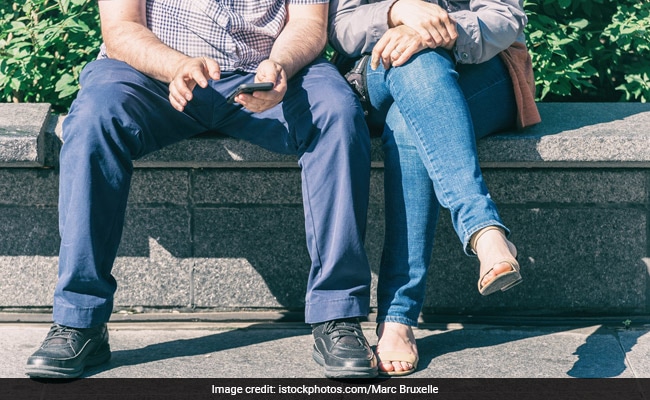 The movement to encourage women to sit like a man - or S.L.A.M. - started with an ache in a doctor's hips

What does it mean to sit like a man? If you live in a city with a subway, your mind might leap to the scourge of "manspreading," in which men sit with their legs wide apart, taking up more than one seat. But Barbara Bergin, an orthopedic surgeon in Austin, Texas, believes sitting like a man means emulating men's posture in the name of joint health.

The movement to encourage women to sit like a man - or S.L.A.M. as Bergin calls it - started with an ache in the doctor's own hips. Around 2010, Bergin, now 65, started experiencing symptoms of bursitis, an inflammation of the fluid-filled sacs that act as a cushion between joints and soft tissue. She initially chalked it up to her age. Then she realized the pain went away on weekends when she was driving her big truck instead of the compact car she took to work during the week. Her hypothesis: the bucket seats of the smaller vehicle forced her knees closer together, causing hip pain.

"Developmentally, women have a wider pelvis than men," Bergin explains, which means the femur, or the thighbone, rotates internally from the hip joint. That rotation can cause the knees to line up inside the hips (the medical term is genu valgum) and result in a knock-kneed stance, and such misalignment can lead to pain in the knees or hips.

Her self-diagnosis turned into a lightbulb realization that she quickly began sharing with patients: Women's genetic predisposition to be knock kneed is only exacerbated by what Bergin, in her Texan twang, calls "sitting ladylike," with knees together or legs or ankles crossed.

This is a societal expectation that goes back centuries. "Historically speaking, the first mention of how women should be seated was in the 1300s," says Myka Meier, the founder of Beaumont Etiquette, an education consultancy specializing in social graces and corporate protocol. According to antique etiquette manuals, women of that era were coached to keep their knees pressed together to signal virginity.

The symbolic gesture persisted through the Victorian Era before slightly abating during the Jazz Age, when hemlines were raised and legs were liberated from the oppression of heavy skirts. Pants came into fashion among women for practical reasons during World War II, but the backlash to women's work in the 1950s marked the return of so-called traditional values and feminine silhouettes.

Even when hemlines began to rise in the Swinging Sixties, the idea that a respectable woman sat with her knees pressed together stuck. Crossed legs and ankles remain a social expectation and postural norm today.

"There are definitely anatomical features that are more common in women and cause women to be more at risk for certain musculoskeletal problems," says Chisa Hidaka, a physician who trained in orthopedic surgery and has taught applied anatomy of human movement in the dance school at Barnard College for more than a decade. "It's helpful to say, 'What are the social and cultural things that could be causing that?' because something that's a cultural or social influence could be classified as a modifiable risk factor."

This is Bergin's goal: To make women realize that sitting habits can be a risk factor for musculoskeletal problems, and that they may be able to avoid particular aches, pains and conditions by refusing to sit with their legs pressed together, crossed or otherwise anatomically scrunched. (Note: Sitting with crunched legs does not cause varicose veins; "that's more of a genetic predisposition," Bergin says).

"Observe men: They're usually sitting with their legs slightly apart and pressed slightly outward," Bergin says. Be mindful of inward rotation. Let the outer thigh relax. When you stand up, don't let your knees collapse inward - it puts pressure on the joints in a way that can contribute to wear and tear over time. Don't overcompensate, either. "A lot of my patients will say: Oh, you want me to 'manspread.' That's too far the other way," Bergin said. "We want [your legs at] about 11 and 1 o'clock."

Charla Fischer, an orthopedic surgeon at New York University's Langone Spine Center, notes that particular postures among women can also be problematic when they're on their feet.

"The way men stand is with equal weight on both legs, so there's no hip curvature," she says. "The way women often stand, with their weight on one side and one foot forward, [can] put undue stress on both the leg you're standing on and also the leg you're not standing on because it's working really hard to hold the pelvis up."

Bergin adds that high heels are another gender-specific culprit of musculoskeletal problems. "If you see 100 people with painful bunions or hammer toes, 95 of them are women, and it's from jamming [their toes] down into tight, pointy shoes," she adds, lamenting the fact that heels are still a staple of professional corporate dress codes. "We are definitely better off not wearing heels or wearing them as little as possible."

Meier, the etiquette expert, teaches gender-neutral practices across the board. For example, she tells male students to say "Please, after you" rather than "Ladies first." In terms of posture, she advises sitting positions that are focused on maintaining good posture, no crossed knees need apply.

"When you take one leg and cross it over, you naturally start to lean back and you lose that power pose," Meier says. "There are still a lot of thought processes out there that say 'Ladies should sit this way because they are ladies.' " But she sees more than a danger of physical aches and pains. By sitting with crossed legs, "I think we're putting ourselves back in a position we fought so hard to get out of."

(This story has not been edited by NDTV staff and is auto-generated from a syndicated feed.)
Comments
orthopedic surgeonManspreading