'Why is Arvind Kejriwal Making This a Prestige Issue?' Court Asks on Row Over Bail 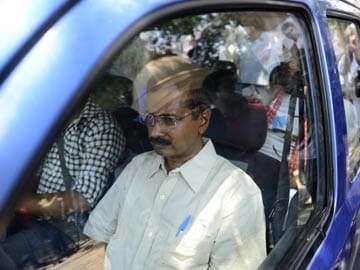 New Delhi: A Delhi Court today asked Arvind Kejriwal, the chief of the Aam Aadmi Party, to furnish a personal bond for his bail, questioning why he had made it a "prestige issue." (In Courtroom Packed With Supporters, Arvind Kejriwal Argues His Own Case)

Mr Kejriwal has been in Delhi's Tihar jail since Wednesday after refusing to furnish a bond needed for bail, in a defamation case filed against him by the BJP's Nitin Gadkari. He insists that the court should not ask him for one, as he is an upright citizen and has committed no crime. (Kejriwal Sent to Tihar; AAP Leaders Detained During Protests Against His Arrest)

Mr Kejriwal on Monday moved the Delhi High Court for his immediate release.

Hearing his petition, the court today said, "It is a small case. Why are you making it big? Why are you taking this as a prestige issue?" ( Nitin Gadkari slaps defamation notice on Arvind Kejriwal)


The court also appeared to rebuke AAP leader Prashant Bhushan and his father, former law minister Shanti Bhushan, who are representing Mr Kejriwal. (Kejriwal To Remain in Jail Till June 6)

"Mr Kejriwal should be given proper counselling by you," the court said, addressing them.

Promoted
Listen to the latest songs, only on JioSaavn.com
The AAP chief was jailed on Wednesday and first sent to judicial custody for two days. The court ordered 14 more days in custody when Mr Kejriwal remained adamant on not furnishing a bail bond.

After today's hearing, Prashant Bhushan went to the Tihar jail, apparently to persuade Mr Kejriwal to come out of jail and then fight his case, as the court had advised.