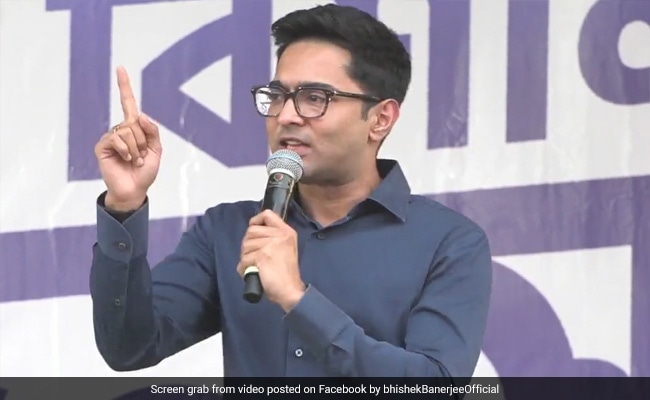 Trinamool Congress national general secretary Abhishek Banerjee on Saturday mocked BJP's Suvendu Adhikari calling him as 'Reservation Against Cancellation' (RAC) Leader of the Opposition, pointing out that the BJP leader's victory was under a legal challenge in courts of law.

Alleging that Adhikari had won the assembly election against Mamata Banerjee in 2021 by resorting to unfair means, Banerjee claimed fresh elections would see the locals defeating the former TMC leader-turned BJP strongman “befittingly.”

"He claims to have defeated the CM. He calls her a Compartmental CM. Before calling Mamata Banerjee he must realise that he himself is an RAC Opposition Leader. He is the only MLA in India, whose 'victory' is still under trial," Banerjee said while speaking at a party rally here, in the run up to Panchayat polls which are likely to be held early next year.

The rally was held on the ground of Prabhat Kumar College, which is only a few metres away from Adhikari's residence "Shantikunj".

"You took to 'load shedding' (power black-out) to (manipulate votes and) win the Nandigram elections... media had telecast that Mamata Banerjee had won the elections. Take it from me there will be a fresh election in Nandigram and the people here will give a befitting reply," he said. Suvendu Adhikary had won the nandigram seat by a slender margin over his rival chief minister Mamata Banerjee in a bitterly contested election last year, which TMC claimed had been `fouled' by manipulation.

The junior Banerjee on Saturday launched 'Ek Dake Abhishek' in order to listen to the grievances of the people of Purba Medinipur district.

Abhishek Banerjee speaking at the rally held at Prabhatkumar College, near Adhikari's house at 'Shantikunj', announced that people of East Medinipur can call him up with any problems they may have.

"I am giving the number of 'Ek Dake Abhishek' (Call Abhishek directly)". You can directly contact me daily from 9 am to 6 pm. Anyone who has anything to say, call me directly.”

Incidentally, the TMC's Diamond Harbour MP had launched this system in his constituency last June.

Earlier, the BJP had moved the Calcutta High Court to oppose the holding of a rally near Adhikari's house in Contai, but the court had ruled that in a democracy, anyone is allowed to hold a rally, while issuing instructions to ensure that all norms are followed.