CPM sources said Manik Sarkar needs to campaign in the entire state and not be restricted to his traditional constituency Dhanpur. 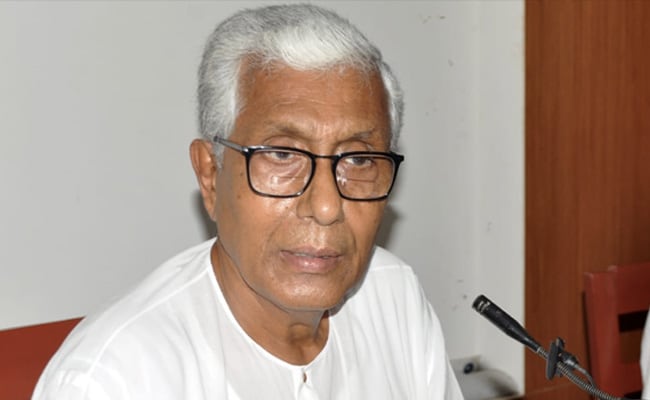 CPM's Manik Sarkar headed the Tripura government from 1998 to 2018.

Biggest face of the Left parties in Tripura, four-time Chief Minister Manik Sarkar, will not contest the assembly election due next month. Sources said the CPM did not give ticket to the 74-year-old. The party, instead, announced that he would lead the Left campaign across the state.

The CPM had ruled Tripura from 1978 to 2018 -- with a five-year-break in between. Mr Sarkar, one of their best, had managed to keep the peace in the tiny state bordering Bangladesh, once a hotbed of insurgency and clashes between the Bengalis and tribals.

Mr Sarkar has been known for his clean governance, which saw a rise in literacy, drop in poverty and malnutrition and push for women's empowerment.

A dyed-in-the-wool communist and a politburo member of the party, his personal record too had the mark of impeccable honesty. The former Chief Minister -- once known as the country's poorest Chief Minister -- is the most credible face of the state party.

There are hopes that Mr Sarkar -- who headed the state government from 1998 to 2018 -- will be able to again draw the Left's biggest vote bank, the tribals and the Dalits who shifted allegiance to the BJP-IPFT (Indigenous Progressive Front of Tripura) alliance. CPM sources said Mr Sarkar needs to campaign in the entire state and not be restricted to his traditional constituency Dhanpur.

The BJP rose to power in the state in 2018, scripting history with 36 of the state's 60 seats -- up from zero. Its ally, the IPFT, got eight seats. The CPM was reduced to 16 seats and the Congress, which was the main Opposition in the previous Assembly, was wiped out.

After the shock defeat, the CPM has worked out a seat-sharing agreement with the Congress this time. The Left Front will contest 47 of the state's 60 seats, leaving just 13 for the Congress. There will be 24 new names in the candidate list of the Left. Out to project a fresh face, the Front has dropped many established candidates, including six-time MLA Badal Chowdhury.

The Left Front has also indicated that they want TIPRA Motha -- the party proposing statehood for indigenous communities -- in the alliance. But that hope may not materialize, with erstwhile royal Pradyot Kishore Debbarma being called to Delhi to discuss the demand of constitutional safeguard for indigenous tribals, with Union home minister Amit Shah.