Whose Room Is It? Law-Makers Fight, Fling Nameplates 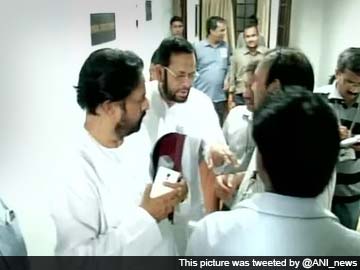 New Delhi: Lawmakers from the Trinamool Congress and the Telugu Desam Party engaged in an unseemly row over Room number 5 in Parliament House today.

Trinamool members of Parliament like Sunil Bandyopadhyay and Sultan Ahmed claimed their party had been allotted the room on the ground floor of the circular building by the Lok Sabha Speaker and moved to occupy it.

But TDP members attempted to stall them; they were allotted the room in 1999 by then Speaker GMC Balayogi, who belonged to the Andhra Pradesh party, and have used it for the last 15 years.

Nameplates were flung about as angry MPs from both sides refused to cede ground.

Real estate is at a premium in Parliament House and rooms are allotted according to party strength. A room on the ground floor is a status symbol that advertises that strength.

Mamata Banerjee's Trinamool Congress, with 34 MPs in the Lok Sabha is the fourth largest party in the House.

Promoted
Listen to the latest songs, only on JioSaavn.com
The TDP, which was a big party and a key member of the Atal Bihari Vajpayee-led NDA government 15 years ago, is back in government but with a much smaller contingent of 16.