The 25-year-old Patel quota spearhead ended his 19-day-long fast Wednesday which was undertaken to demand reservation for his community and loan waiver for the farmers of Gujarat. 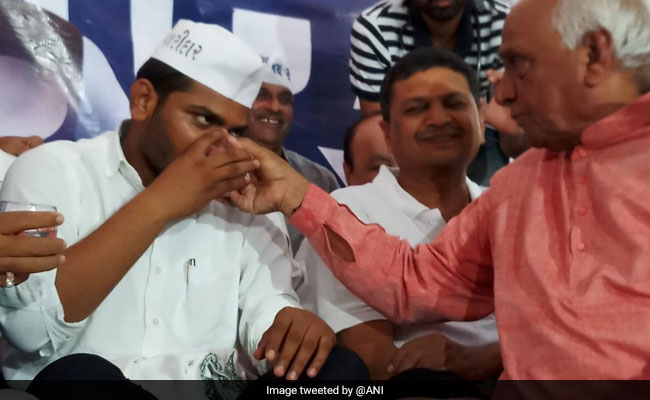 Hardik Patel started his fast on August 25 and shunned water from September 6. (File)

Candidates appearing in a competitive examination held for clerical posts in the Gandhinagar civic body on Sunday were asked a question related to Patidar leader Hardik Patel.

The 25-year-old Patel quota spearhead ended his 19-day-long fast Wednesday which was undertaken to demand reservation for his community and loan waiver for the farmers of Gujarat. The question was related to his hunger strike.

The multiple choice question was: Which political leader offered water to Hardik Patel who recently sat on fast?

The right answer is Sharad Yadav, a former Union minister and ex-chief of the JD(U).

Hardik Patel started his fast on August 25 and shunned water from September 6. On September 7, the 14th day of his fast, he was shifted to a private hospital here after his health deteriorated.

The next day (September 8), he was offered water by Yadav in the hospital. The Patidar leader continued his fast after being discharged from the hospital on September 9 and ended his hunger strike on September 12.

Several political leaders visited Hardik Patel when he was sitting on the indefinite fast at his residence near here.

Asked how and why Hardik Patel featured in the competitive examination paper, Gandhinagar Mayor Pravinbhai Patel said he had no idea.

He said elected representatives of the Gandhinagar Municipal Corporation were not part of the examination process.

"The Gujarat Technological University was outsourced the task of conducting the examination and no elected representative of the civic body was involved in any way," said Pravinbhai Patel.

Hardik Patel launched his hunger strike in support of two demands -- quota in jobs and education for his community members under the OBC category and loan waiver for the farmers of Gujarat.

Later, he added a third demand - the release of his aide Alpesh Katheria, arrested on sedition charge.

However, there were no talks between him and the Gujarat government over the demands.