Video: Where Is Shashi Tharoor's Accent From? Here's What He Told NDTV

Ahead of Congress chief polls, Shashi Tharoor was asked how to respond to those who point out his "Oxbridge accent" to say he can't lead party revival

Shashi Tharoor in conversation with NDTV on day he filed nomination for Congress top post.

In the contest to become Congress chief, former union minister Shashi Tharoor today said the accent in which he speaks English -- he described it as "Stephanian" — should not be seen as a marker of his being elitist.

"If there are people who don't want to look beyond my accent, they don't have to vote for me. Look, ultimately, we have an electoral college," said the MP from Thiruvananthapuram, speaking to NDTV. Over 9,000 delegates from across India form the party electoral college for the October 17 vote.

Mr Tharoor, who has studied in Delhi and the US, was asked how he'd respond to those who point out that he has "an Oxbridge accent" and therefore could not be president of a pan-India party of the masses.

"If the implication is that I am some sort of elitist, I will point out I have won 3 Lok Sabha elections," he said. "Thiruvananthapuram, despite being the capital of Kerala, is a 66 per cent rural constituency . I have fisher folk, hill dwellers, tribals, all sorts of people, whose votes I need to attract. And I have done so," he argued. 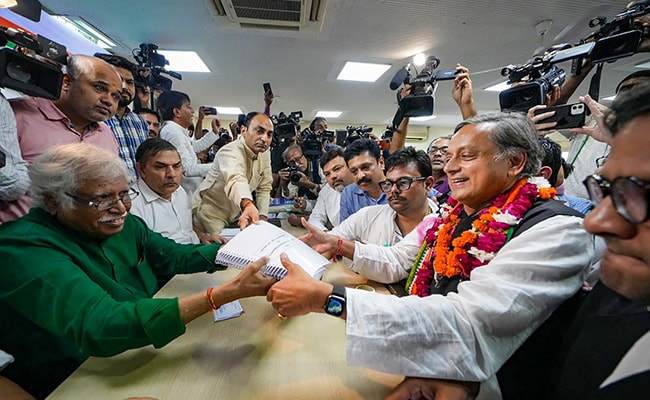 "I don't think anyone sees me as some sort of transplanted Oxbridge... By the way, I never studied in Oxbridge. I only debated there," he added. Oxbridge is a reference to elite universities Oxford and Cambridge in the UK.

On where he got his accent from, Mr Tharoor said, "It is a Stephanian accent. I can point you to 10 others (who have it)," referring to his alma mater, St Stephen's College in Delhi.

Born in London in 1956, Mr Tharoor studied history at Stephen's, where he was also the president of the student union, and later went for his masters from Fletcher School of Law and Diplomacy, Medford, US, where he completed a PhD, too, in 1978.

A former diplomat who served as United Nations Under-Secretary General for Communications and Public Information, Mr Tharoor is often in the news for his English vocabulary and tweets about it. He had contested to become UN chief, but lost.

To become Congress chief, he is facing Rajya Sabha member Mallikarjun Kharge, who has the backing of the Gandhis in the party's first election in 20 years that will conclude with a non-Gandhi in the top post.

Spoke to Mallikarjun @kharge ji to wish him the best in the upcoming election. He recalled when I first met him in Bangalore during my UN days, when he was Home Minister. We worked well together in the LokSabha & he was gracious as ever in wishing me luck. @INCIndia

Hours after filing his papers, Shashi Tharoor got into a controversy over a wrong map of India in his manifesto. He apologised and corrected it, saying his team made an error.