What Amazon's Win In Supreme Court Means For Reliance

The two behemoths, owned by two of the world's richest men, Jeff Bezos and Mukesh Ambani, are fighting for a bigger slice of the Indian market.

Mukesh Ambani's planned $3.4 billion purchase of an indebted retailer suffered a blow after Amazon.com Inc. won a court battle to halt the transaction, disrupting the tycoon's ambitions to take on the US e-commerce giant in the $1 trillion local market.

On Friday, a two-judge bench of Supreme Court ruled that an emergency order by a Singapore arbitrator last year, which stopped Reliance from proceeding with the deal, is legally binding. Amazon had approached the arbitration court, and the parties will now have to wait for the deliberations of that body before a final decision.

The court's verdict is the latest episode in a bitter battle over the cash-starved Future Retail Ltd. -- the nation's second-largest supermarket chain -- which both Jeff Bezos-founded Amazon and Mr Ambani's Reliance Industries Ltd. want to control. The two behemoths, owned by two of the world's richest men, are fighting for a bigger slice of the only billion-people plus consumer market that's still open to foreign firms.

Reliance dropped as much as 2.6% in Mumbai on the ruling, the biggest intraday decline in two weeks. Future Retail plunged by its daily limit of 10%, the most in more than four months. 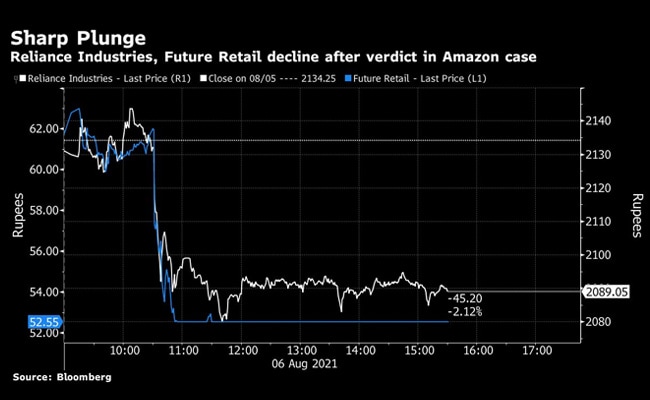 Reliance shares dropped as much as 2.6% in Mumbai after the ruling today.

For Seattle-based Amazon, adding Future's Big Bazaar brand of stores to its assets would help expand its brick-and-mortar footprint across the country. Mr Ambani announced his plans to buy Future's assets almost a year ago to help aid his retail push. His oil-refining conglomerate has identified e-commerce and conventional retail as two focus areas, and roped in investors including Facebook Inc. and Alphabet Inc.'s Google in 2020.

"The court verdict puts a speed breaker on Reliance's retail dominance in India," said Devangshu Dutta, founder and chief executive officer of the Delhi-based retail consultancy, Third Eyesight. "It balances the competition with the larger American players, and gives Amazon a much-needed presence in physical retail."

The feud highlights the importance of the Indian consumer market. Amazon has pledged $6.5 billion of investment, while Walmart Inc.-owned Flipkart recently mopped up $3.6 billion in the country's largest fundraising at a valuation of nearly $38 billion.

Amazon owns a stake in an unlisted Future unit and has argued that it contractually has the first right of refusal to buy Future. It went to the Singapore arbitration court last year, accusing the Indian retailer of Future Group of violating that contract when it agreed to sell its wholesale, warehousing, logistics and other retail assets to Mr Ambani's conglomerate.