Were funds for SC/ST schemes used for Commonwealth Games? 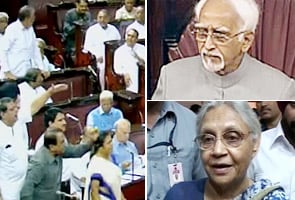 New Delhi: BSP, BJP and the Left parties on Tuesday created uproar in Parliament over allegations of diversion of funds for SC/ST schemes to Commonwealth Games projects and demanded a Parliamentary probe into it.

The members of these parties forced three adjournments in the Rajya Sabha before lunch, alleging that the CWG projects were witnessing "loot" of public money. The least that the government can do is to ensure that funds meant for SC/STs were not diverted.

In the Lok Sabha too, BSP members disrupted the proceedings briefly.

As soon as Rajya Sabha met for the day, BSP members were on their feet referring to an RTI reply which reportedly showed that the Delhi government diverted Rs 744 crore from Special Component Plan for SC/ST to Games projects.

The members, wanting an immediate discussion on the issue, created pandemonium which led to three adjournments.

The Chair, finally allowed a brief debate on the issue in post-lunch sitting.

Raising the matter, BSP leader Satish Chandra Mishra demanded that a Parliamentary committee should be set up to probe the allegations of fund diversion.

Describing the Congress governments at the Centre and Delhi as "anti-dalit", he said, "There is 2.4 million SC population in Delhi. Instead of providing civic infrastructure and other facilities for them, it was spent on a 14-day event. This is shameful."

Mishra said the funds were diverted flouting guidelines of the Planning Commission and the National Development Council.

Venkaiah Naidu (BJP) termed the diversion of funds given under constitutional provisions as "atrocious" which was "unacceptable". His colleague S S Ahluwalia said there was a "ghapla (bungling)" in the CWG projects.

Brinda Karat (CPM) said even labourers, mostly SC/STs, were being exploited by the contractors.

Janardan Dwivedi (Congress) requested the government to come out with a response but took a dig at the BSP saying there should be a separate debate on who has done what for the dalits.

Responding to members' concern, Minister of State for Parliamentary Affairs, Prithviraj Chavan agreed that the matter was serious and he would ascertain the facts from the Delhi Government and report back to the House next week.