President Ebrahim Raisi said the Iranian government will pursue a policy of developing relations with neighbouring countries and the region, especially India 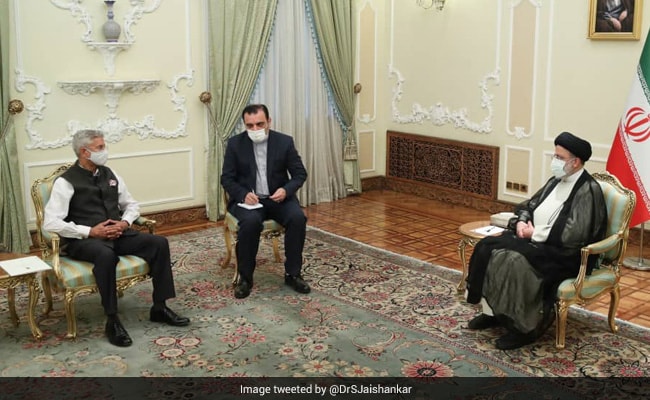 Mr Raisi's comments came during his meeting with Mr Jaishankar, a day after the 60-year-old Iranian leader was sworn in as the country's President. This was the second meeting between the leaders of the two nations in one month.

Mr Jaishankar had met Mr Raisi, then President-elect, on July 7 during a stopover at the Iranian capital on his way to Russia. During Friday's meeting, the Iranian President stressed the importance of close cooperation and coordination between the two countries in developing peace and stability in the region.

"Iran and India can play a constructive and useful role in ensuring security in the region, especially Afghanistan and Tehran welcomes New Delhi's role in the establishment of security in Afghanistan," Mr Raisi was quoted as saying in a press release issued by the President's office.

"The fate of Afghanistan must be decided by the Afghans themselves, and we believe that if the Americans do not sabotage the situation, this issue will be resolved quickly," Mr Raisi added.

Emphasising that the Islamic Republic of Iran attaches special importance to establishing extensive relations with India, Mr Raisi said: "From today on, we should take new and distinct steps in the development of bilateral, regional and international relations with a new perspective."

He said that the Iranian government will pursue a policy of developing relations with neighbouring countries and the region, especially India.

Welcoming Mr Raisi's speech at the oath ceremony on the Iranian government's will to develop relations with neighbouring countries, Mr Jaishankar said: "I will convey your views to the President and Prime Minister of India, and we will try to maximise our cooperation."

A warm meeting with President Ebrahim Raisi after his assumption of office. Conveyed the personal greetings of PM @narendramodi .
His commitment to strengthening our bilateral relationship was manifest. So too was the convergence in our regional interests. pic.twitter.com/D9GS2MGKjx

Mr Raisi, the former judiciary chief who is believed to be close to Iran's Supreme Leader Ayatollah Ali Khamenei, was sworn in during a ceremony held at the Majles (parliament). Mr Raisi won a landslide victory in the presidential election in June.