"We Lost Our Grandfather" Wails Mourner At Karunanidhi's Funeral 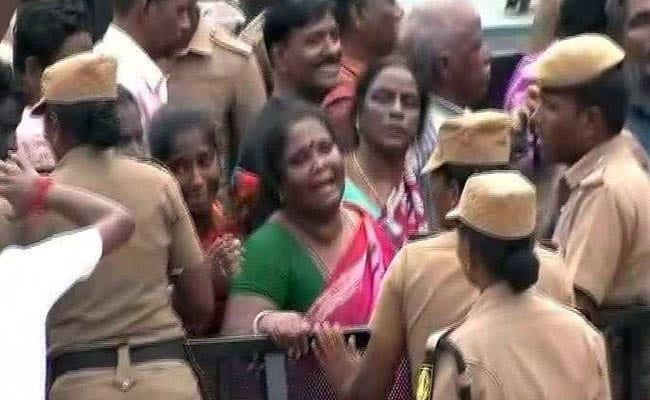 Thousands of people came to Chennai's Rajaji Hall today to pay tribute and say goodbye to a man, who was perhaps the last political giant of Tamil Nadu. 94-year-old M Karunanidhi had been the Chief Minister of Tamil Nadu five times, elected to the Assembly 13 times. He had never lost an election.

Leaders across the political spectrum came to see him off. Prime Minister Narendra Modi was there, so was Congress chief Rahul Gandhi and many chief ministers.  And there were the masses -- with that unusual, intensely personal feeling that so many people of the state show for their leaders.

"We have lost our grandfather. We are lost," a man wept. "I am in the field of IT because of him. He changed my life," said another.

Outside the Kauvery hospital, where Karunanidhi died on Tuesday, the police had kept the crowds under control. Order was also there when his body went to his two homes before being moved to Rajaji Hall early on Wednesday morning.

But as the day progressed and the heat grew, and the road outside the Rajaji hall turned into a solid mass of people, impatience spiked. An elderly woman collapsed and had to be revived with water.
Police efforts to keep them under control went in vain. In many places, frenzied party cadres were seen arguing with the police, demanding that they be allowed to go forward and pay homage to their Kalaignar (artiste).

Sometime in the afternoon, people from all sides tried to rush in. They broke barricades, climbed over them and flooded the compound. Several men and women suffered bruises. Two people were killed as the rush for a final glimpse of "Kalaignar", A few others sustained injuries in the melee, the police said.

Mr Karunanidhi's son, DMK chief MK Stalin, appealed for calm and asked the crowd to move towards the burial ground at Marina Beach - the location over which the party battled the ruling AIADMK late into night and since morning.

The last towering leader of Tamil politics will be laid to rest between his mentor CN Annadurai and AIADMK archrival MG Ramachandran, whose memorial also houses the memorial of Jayalalithaa.

At 4pm, Karunanidhi's body, in its glass coffin, was mounted onto a carriage to begin the slow procession to Marina Beach and to his final resting place. The inscription on his coffin read "The man who never rested, is resting here."