Mr Rawat said the country had nothing to fear irrespective of statements like the one issued by Pakistan Prime Minister Imran Khan that a Pulwama like incident might take place again in Kashmir. 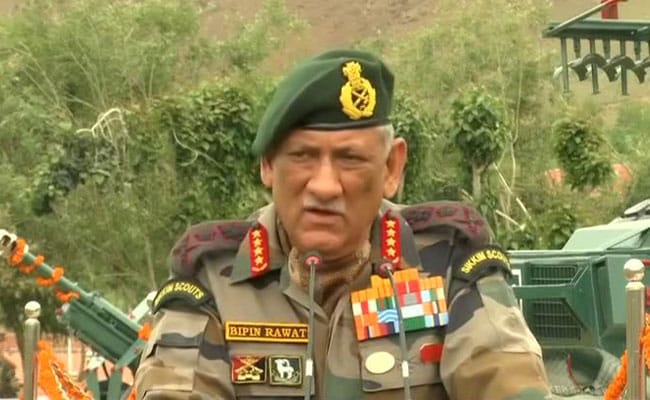 We are always prepared for any kind of eventuality: Army chief

Army chief General Bipin Rawat said on Tuesday that the Army was committed to cordial relations with the people of Jammu and Kashmir even as the armed forces are prepared to deal with any threat from Pakistan.

There has been unprecedented security in the Kashmir Valley to avoid trouble over the centre's decision last week to end special status to Jammu and Kashmir and split it into two Union Territories.

General Rawat said the country had nothing to fear, irrespective of statements like that of Pakistan Prime Minister Imran Khan that a Pulwama-like incident might take place again in Kashmir because of the situation in Kashmir.

"We are always prepared for any kind of eventuality and we are always on the alert. There is nothing to worry from statements like these," the Army Chief said.

In Pulwama, over 40 security personnel were killed in February when a CRPF convoy was attacked by a suicide bomber of the Pakistan-based Jaish e Mohammad. The Indian Air Force then bombed a major terrorist hub in Pakistan.

Pakistan has downgraded diplomatic relations with India and suspended bilateral trade over the Kashmir decisions.

Imran Khan had told a joint session of the Pakistan Parliament that a Pulwama like incident might happen again as a result of the recent political developments in Kashmir.

"Attacks like Pulwama are bound to happen again. I can already predict this will happen. They will attempt to place the blame on us again. They may strike us again, and we will strike back," Mr Khan had said.