The self-professed "god-woman" in Uttar Pradesh, who calls herself "Maa Aadi Shakti (Mother of divine power)", created a flap for about an hour this morning

"Try and remove me," a woman in a red silk sari, eyes blazing with defiance, declares as she points a sword at policemen tasked with enforcing a 21-day nationwide lockdown to fight coronavirus. The bizarre showdown, caught on mobile phone camera, ended with a group of policewomen arresting her and dragging her away in a van.

The self-professed "god-woman", who calls herself "Maa Aadi Shakti (Mother of divine power)", created a flap for about an hour this morning, refusing to end a religious gathering and even pointing a sword at two truck-loads of police who were trying to restore order.

It took a mild lathi-charge to finally remove the "devotees" - some all the way from neighbouring Bihar.

The woman chose the first day of the lockdown ordered by Prime Minister Narendra Modi to call the religious meeting, ignoring all social distancing rules and a ban on such gatherings in the time of coronavirus or COVID-19, which has infected over 560 people in the country. 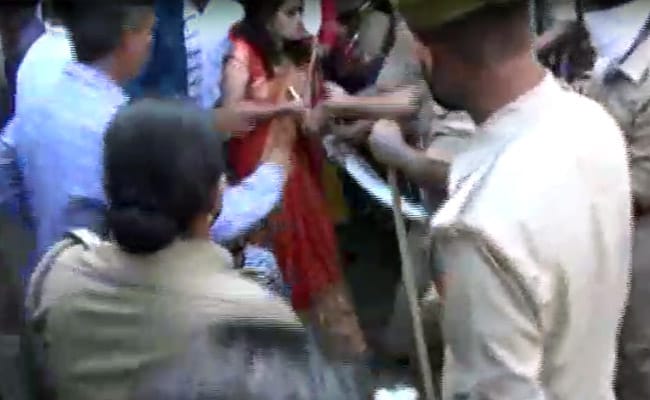 Some 100 people had gathered at the woman's home at Mehda Purva in Uttar Pradesh's Deoria district, around 300 km from Lucknow.

Someone tipped off the cops and they arrived with lathis, hoping to quickly disperse the gathering. Not without some drama, the woman apparently decided.

Mobile phone footage shows the woman daring the cops to remove her. From a loudspeaker, a cop repeatedly announces - "We will file a case against you and your followers. This is your last chance. Stop this gathering. All of you go home or we will take strict action."

The footage next shows the police grabbing the woman and her sword and pinning her to the ground.

Much chastened, she is heard saying, while being led away: "I am coming on my own." Her followers are seen ducking and running to avoid police batons.

The area is quiet now and the lockdown has been restored, the police said.