Smriti Irani was in Amethi along with Goa Chief Minister Pramod Sawant to meet the family members of a BJP worker who was killed last month. 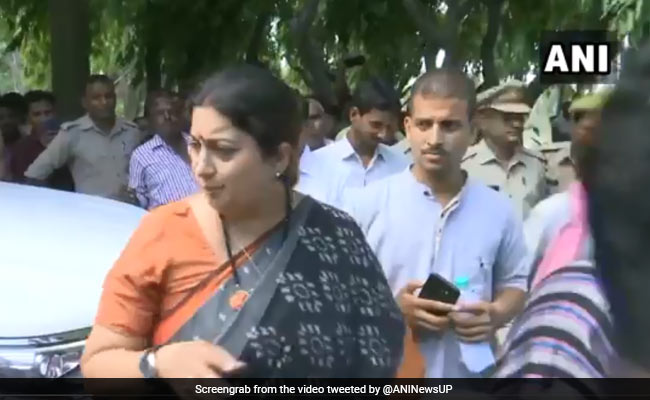 Union Minister Smriti Irani was seen helping a woman get an ambulance in Amethi.

Union Minister Smriti Irani, who is on a two-day visit to her constituency of Amethi in Uttar Pradesh on Saturday, was seen ensuring that a woman was taken to hospital in the ambulance which was part of her convoy.

Ms Irani was in Amethi along with Goa Chief Minister Pramod Sawant to meet the family members of a BJP worker who was killed last month.

This was her first planned visit to Amethi after giving one of the biggest shocks for the Congress by beating Rahul Gandhi in what was considered his family's stronghold.

In a video, Ms Irani can be seen making sure that an unwell woman is carried into an ambulance. The woman, sitting on a chair, is lifted into the ambulance by a group of men as Smriti Irani asks, "Kahan jana, jilla hospital? (Where is she to be taken, district hospital?)" She then instructs, "Take them to Gauriganj District Hospital."

At a public rally in Amethi, Ms Irani took a swipe at Rahul Gandhi. "A social revolution came here when everyone went to polling booths, pressed 'lotus' and gave a message that democracy has not been made for 'naamdaar' (dynast)," she said. "No one had imagined that a woman from a simple family will be given the opportunity to be your representative. In a region which was the stronghold of 'naamdaar', where it was believed that even if the lawmaker does not return for five years, people will accept him," she added.

She won from Amethi over 55,000 votes, defeating Mr Gandhi, its three-time lawmaker.

Smriti Irani had visited her constituency in May after the death of BJP worker Surendra Singh's death and carried his bier on her shoulders amid chants of slogans by villagers.

The dusty, largely rural constituency around 130 km from UP capital Lucknow, had been held by Mr Gandhi's family almost continuously for the last four decades.

During her visit to Amethi, Smriti Irani will lay the foundation stone for some development projects in the constituency and will also meet party leaders and workers. On Sunday, she will hold meetings with officials regarding development of the constituency.