Around 35 labourers were injured after the mini-truck in which they were travelling overturned. A police team in Jabalpur reached the spot and took the injured to a hospital. 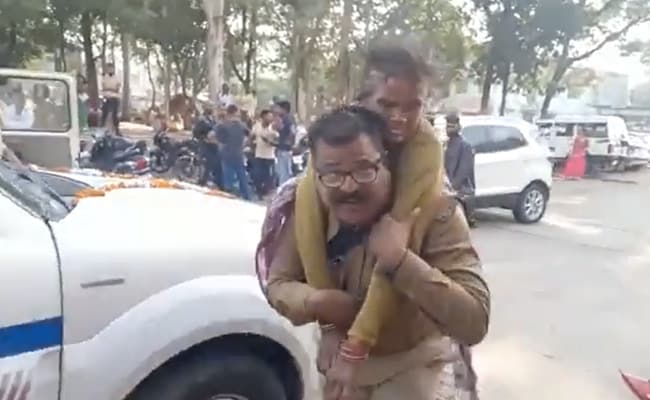 Police officer Santosh Sen had received a bullet injury on right shoulder in 2006.

A police officer in Madhya Pradesh's Jabalpur is winning hearts on the internet after he was seen carrying an injured woman on his back inside a hospital.

On Tuesday, around 35 labourers were injured after the mini-truck in which they were travelling overturned. A police team reached the spot and took the injured to a hospital.

When they reached the hospital, the policemen realised that stretchers were not available to take the injured people inside the hospital.

This is when the cops decided to carry them inside the hospital themselves. Assistant Sub-Inspector Santosh Sen, LR Patel and constables Ashok, Rajesh and Ankit, with the help of locals, lifted the injured on their backs and took them to the casualty department.

A widely-shared video shows Mr Sen, 57, carrying an injured elderly woman on his back and rushing inside the hospital. The woman, visibly in pain, is seen clinging to the police officer. Upon entering the hospital, another cop helps the officer balance the woman on back.

Mr Sen had a bullet injury on his right shoulder around 14 years ago, during a shootout while arresting a missing criminal when he was working in Narsinghpur district. Since that shootout in 2006, the officer has had trouble with his right arm.Madhya Pradesh Chief Minister Shivraj Singh Chouhan tweeted his appreciation for Mr Sen's efforts.

Praising the cops for their action, Inspector General of Police (Jabalpur Range) Bhagwat Singh Chouhan said Rs. 1,000 and a note of appreciation has been given to the police personnel "for setting a good example".

"Around 35 people were injured after the bus carrying them overturned. Our team reached the spot and took them to the hospital. I commend their action. Not a single person got seriously injured in the accident because of the active role of police personnel," the senior police officer said.

"I hope other police personnel will learn from this and act immediately if people need any help," he said.