The clip shared by Union Minister Kiren Rijiju has prompted many comments from Twitter users, who sent their virtual salutes to the Indian Army. 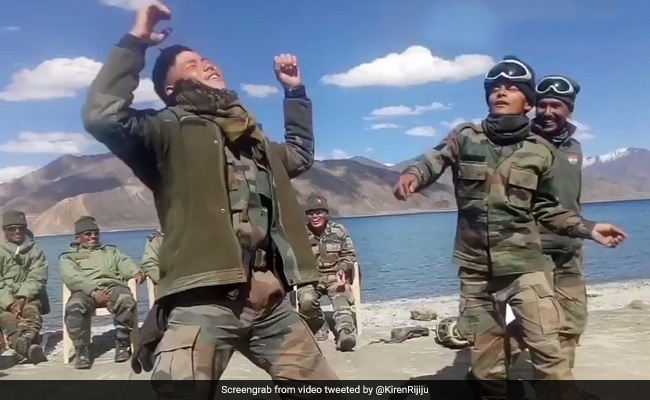 The Indian Army guards the frontiers of the Ladakh region amid harsh weather conditions and not-so-congenial terrains, but there is barely anything that can swerve a soldier's fighting spirit. And that was evident in a heart-warming video shared by Union Minister of Youth Affairs and Sports, Kiren Rijiju, on Twitter.

The 34-second video clip shows two Indian Army Gorkha jawans dancing their heart out to what sounds like a folk song, against the spectacular view of the Pangong lake in Ladakh. "It feels great whenever soldiers enjoy," the MP from Arunachal Pradesh wrote.

The clip, which has garnered over 14,200 likes and has been retweeted more than 2,000 times in less than 48 hours, has prompted a deluge of comments from netizens, who sent their virtual salutes to the Indian Army.

One user posted an emotional reply saying that he is proud of his father, who was in the paramilitary force.

My dad was in the paramilitary forces. Proud of him. Proud of what our defence forces do.

Another sought to highlight how the soldiers deserve some form of entertainment as they battle extreme conditions to protect the country from external threats.

Absolutely. They guard the borders in such extreme conditions and deserve some level of engagement. Jai Hind

Our brave valiant soldiers. So good to see them enjoying and taking some time out for themselves.

Last month, Mr Rijiju had shared a clip in which he can be seen putting his vocal cords to test before a small audience consisting of army personnel. He crooned "Sansar Ki Har Shae" from BR Chopra's 1973 film "Dhund", along with the army band.

I'm not a singer but I proudly sang for our brave jawans!
I had a memorable evening with the personnel of 62 Engineer Regiment of Indian Army after a visit to border to see roads and other infrastructure with DG BRO. pic.twitter.com/zLZNC4o2MF

According to the tweet, he was with the personnel of the 62 Engineer Regiment of the Indian Army after a visit to the border to inspect roads and other infrastructure. Twitter had applauded the minister's singing prowess as well as the precious gesture towards jawans.