A 13-second video of the test, shared by news agency ANI this morning, shows the QRSAM launching in a cloud of smoke 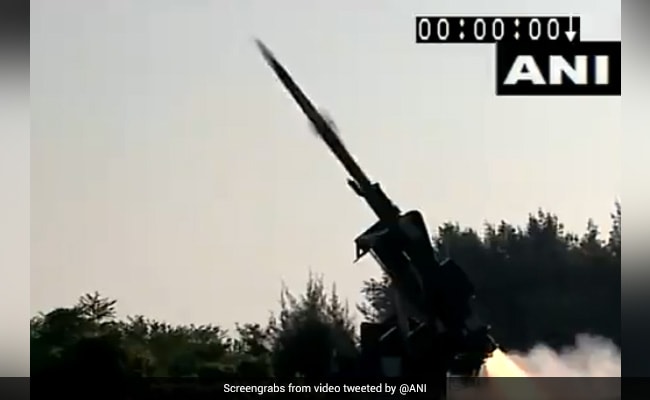 India test-fired a Quick Reaction Surface to Air Missile (QRSAM) to successfully hunt down and destroy a PTA (pilotless target vehicle) off the coast of Odisha's Balasore on Friday.

A 13-second video of the test, shared by news agency ANI this morning, shows the QRSAM launching in a cloud of smoke from the Integrated Test Range (ITR) at Chandipur at around 3.50 PM. The missile took approximately eight seconds to hit its target.

The QRSAM uses a single-stage, solid-propellant rocket and is built using indigenous subsystems. It can be deployed from mobile launchers - each of which has six missiles carried in a canister to make transportation easier - to provide on-the-go support for ground forces.

#WATCH: Successful testfiring of the DRDO-developed Quick Reaction Surface to Air Missile system off the coast of Balasore, Odisha yesterday. The Missile can hit targets in air at a strike range of 25-30 km. During the testfiring, it hit its target directly. pic.twitter.com/szA2J2cytG

The weapons system used in the QRSAM - built with collaboration between defence PSUs (public sector units) and the private sector - is capable of detecting and tracking targets on the move and engaging them with short halts.

All elements of the system - battery multifunction radar, battery surveillance radar, battery command post vehicle and mobile launcher were deployed in the test, a statement by the Defence Ministry said. The entire system is designed to provide aerial cover for strike columns of the Army.

As the missile was fired, tracking stations, radar, electro-optical targeting system (EOTs) and telemetry stations monitored the flight parameters. The radar tracked the PTA from the farthest range and the missile was launched when it was in the kill zone.

The QRSAM scored a direct hit.