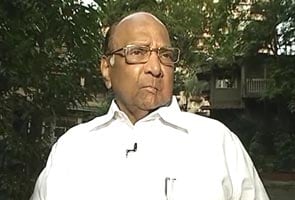 New Delhi: Union agriculture minister Sharad Pawar said today that his party did not participate in the Lokpal debate held yesterday because it wasn't invited. Mr Pawar, who heads the Nationalist Congress Party or NCP, said "the debate will be in Parliament. We will present our opinions in front of the PM."

Mr Pawar is a member of the UPA coalition at the Centre.

Anna Hazare and his team of activists set up a debate at Jantar Mantar yesterday where 74-year-old Anna held a one-day fast to protest against what he describes the government's intent to deliver a weak Lokpal or anti-corruption bill. Major parties like the Left and the BJP made their stands clear on their points of agreement with Anna's team. This was Anna's third fast this year to campaign for a good Lokpal bill. Though politicians seemed to be in favour of most of the demands he has expressed, they were equally clear that the activists must now leave it upto Parliament to work out the terms of the Bill.  "All parliamentary representatives yesterday mentioned the importance of parliament on Lokpal. I am happy about that," said Mr Pawar.

He also said he did not mind the fact that most opposition parties disagree with the government on matters like whether the Prime Minister or junior bureaucrats should be covered by the Lokpal.

Promoted
Listen to the latest songs, only on JioSaavn.com
The Congress skipped the debate on the grounds that it was inappropriate to discuss a bill that has not yet been presented in Parliament. "Whether the debate is on an open field or behind closed doors doesn't matter. Ultimately all views should be considered," said Mr Pawar. Parties like the BJP expressed similar opinions yesterday.

In November, Mr Pawar was slapped by a young man at a public event. The assaulter was reportedly upset with rising food prices. Anna, when informed of the attack, asked "Just one slap?" In a recent blog, he justified that controversial reaction, provoking Mr Pawar to say, "In the recent past, Shri Hazare by supporting the physical assault on me at a public function has given a new definition to the concept of Gandhism and non-violence."