Indian, US, Japan Warships Sail Out To Bay Of Bengal For Malabar Exercise

Sixteen ships and more than 95 aircraft from the three countries are participating in the Malabar joint naval exercise. 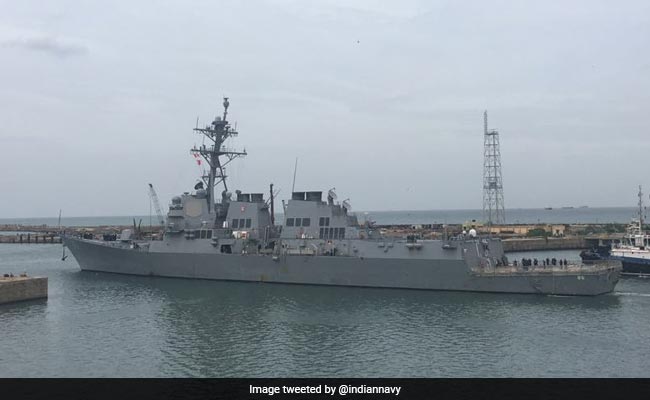 Chennai: Frontline warships and submarines of India, the US and Japan on Thursday sailed out from Chennai harbour to participate in the sea phase of the Malabar joint naval exercise at an undisclosed location in the Bay of Bengal, Navy officials said.

Sixteen ships and more than 95 aircraft from the three countries are participating in the exercise. The sea phase would be held deep in the Bay of Bengal, the exact location of which has not been revealed.

The annual Malabar exercise comes amid reports of Chinese warships prowling in the Indian Ocean Region in the name of anti-piracy operations, and Beijing's aggressive posturing in the South China Sea.

The sea phase will see the ships, aircraft and submarines being divided into two teams - red and blue, and a war-like situation will be emulated, navy officials said.

Air defence, surface warfare, visit board search and seizure (VBSS), search and rescue, joint manoeuvres and tactical procedures are to be a part of the war game.

In addition, officials from the three countries will be flown onboard the ships at sea on July 15.

The exercise will also witness a separate interaction between the Indian Navy and US Navy Special Forces and Explosive Ordnance Disposal teams at the Indian Navy's MARCOS training base INS Karna at Visakhapatnam.

The harbour phase of the exercise started on July 10, and prior to that, a series of meetings and interactions between Indian and visiting Naval officials were held.

Promoted
Listen to the latest songs, only on JioSaavn.com
China had last week expressed hope that the joint naval drill between India, Japan, and the US was not aimed at other countries.