Voters were seen queuing outside polling stations in both Jammu division and Kashmir valley despite the morning chill. 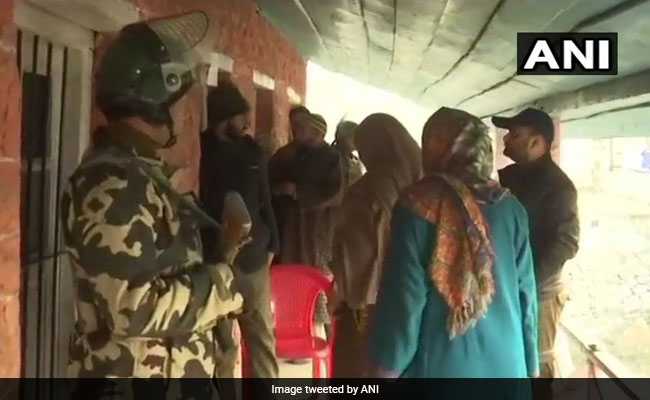 Jammu and Kashmir panchayat polls saw an overall voter turnout was 76.2 per cent

Polling for the 6th phase of Panchayat polls ended peacefully today in Jammu and Kashmir under tight security arrangements.

Voters were seen queuing outside polling stations in both Jammu division and Kashmir valley despite the morning chill.

Polling started at 8 am and ended at 2 pm.

In a re-poll held in Kupwara district, 81.9 per cent votes were cast.

In the Jammu division, 83.7 per cent voter turnout was recorded.

For the entire state, the overall voter turnout was 76.2 per cent.

At least of 771 polling stations had been categorised as hypersensitive -- 410 in Kashmir and 361 in Jammu.

Some 597,396 electors were eligible to vote for the Sarpanch constituencies and 457,581 for the Panch.

Photo Voter Slips had been distributed among the voters to inform them of their polling stations.

In the fifth phase on November 29, the state witnessed a polling percentage of 71.1 per cent.

The fourth phase on November 27, 71.3 per cent polling was recorded.

The third phase held on November 23 witnessed a polling percentage of 75.2 per cent, while 71.1 per cent was recorded in the second phase on November 20.

In the first phase held on November 17, 74.1 per cent polling was recorded.

The last polls of the nine-phased election is scheduled for December 11.

Panchayat elections were last held in Jammu and Kashmir in 2011.