Chief Minister Mamata Banerjee came out against the fencing, while Governor Jagdeep Dhankar expressed concern over the situation. 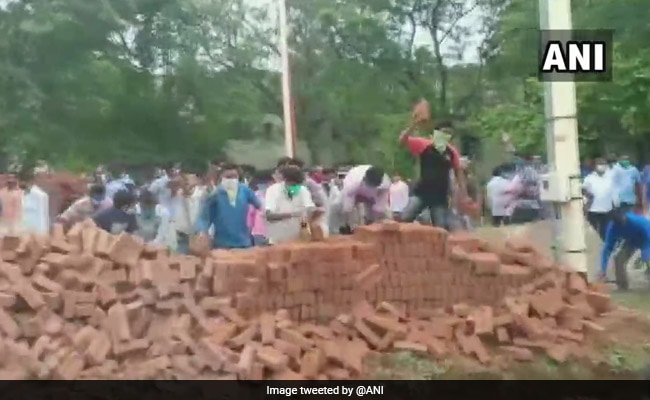 The Visva Bharati University was on Monday shut down indefinitely following violent protests against the varsity's decision to construct a boundary wall around the venue of Poush Mela, a prestigious annual cultural event started more than a century ago.

Chief Minister Mamata Banerjee came out against the fencing, while Governor Jagdeep Dhankar expressed concern over the situation.

Trouble erupted at the Visva Bharati campus in Monday as a large number of people ransacked the university's properties protesting erection of the boundary wall of the fair ground.

Sources said that the university authorities had decided to fence the ground where the annual winter carnival started in 1894 by Debendranath Tagore, father of Nobel laureate Rabindranath Tagore, is held and the construction work started in the morning.

Following the incidents of violence, the varsity authorities decided to bring the matter to the notice of Prime Minister Narendra Modi, who is also the Hon'ble Chancellor of the university, and decided to close down the university campus till the situation improves.

However, admission, examination process and emergency services would be taken care of.

The Trinamool Congress government condemned the violence, but threw its weight behind the protestors, as West Bengal

Chief Minister Mamata Banerjee said she doesn't want any construction to take place on that site and has asked the district administration to call meeting of the stakeholders.

According to district officials, tension between the locals and the university authorities have been simmering for last few days over the latter's decision to construct a boundary wall around the venue of the fair held in the Bengali month of Poush, usually December-end.

On Saturday miffed by the decision of Visva Bharati to call off "Poush Mela'' from this year, a local traders' body prevented the university authorities from erecting a boundary wall along with the fair ground.

The tension snowballed into large scale violence after 4,000 people assembled near the campus this morning and then entered ransacking some properties and pulling down one of the university gates built outside the ground using a JCB machine.

On the basis of the suo moto complaint lodged by police eight persons have been arrested in connection with Monday's vandalism," Shyam Singh, SP, Birbhum said.

According to sources, Trinamool Congress MLA from Dubrajpur, Naresh Bauri, who is also a former student of Visva Bharati, was present when ransacking was taking place.

"I am present here not as a TMC leader but as a former student of the university. The construction of the boundary wall is unacceptable. The university authorities are behaving strangely," Mr Bauri said.

The construction workers were thrashed, and the temporary camp office was also razed to the ground

Sources said a wall around the field was needed so that "outsiders" do not get access to it, which had angered the local traders.

The university authorities said that the fence is required to honour verdict of the National Green Tribunal, which had on November 1, 2017, said that a "barrier needs to be constructed to demarcate the Mela ground from the university and the locality."

While reacting to the violence, the university authorities in a press statement said they have decided to shut down the campus until the situation becomes normal.

"Given vandalism today leading to the destruction of university property worth several lakhs (of Rupees) due to the complete absence of police deployment in spite of having two police stations within the university campus, it is decided to bring this to the notice of the Hon'ble Chancellor (Prime Minister)," the university said in a press statement.

"Given the volatile situation in the campus, and also the threat to many colleagues with dire consequences, it has been unanimously resolved in the meeting of all directors, Principals and HODs to close the university till the situation improves," it said.

The district administration has convened a meeting of Visva Bharati authorities and other stakeholders on Wednesday to look into the matter.

The incident triggered a political face-off between the TMC government and the opposition parties and Raj Bhawan which accused it of not doing enough to avert the violence.

Underscoring that Visva Bharati is a central university, Ms Banerjee had said that she had a word with the governor regarding Monday's violence on the fair ground and told him that the state government's role in the matter was "limited" and blamed the "outsiders for trying to protect the construction."

"The governor had called me. We had a discussion over the violence that took place on the ground. I told him that Nobel laureate Rabindranath Tagore founded it with a vision to celebrate different festivals... I also told him that I don't want any construction to take place on that ground.

"There were outsiders who were trying to protect the construction," she said.

Earlier in the day, West Bengal Governor expressed concern over the situation and said the status of law and order in Visva Bharati is alarming.

"The events that unfolded during the day have tarnished the image of state of West Bengal and have been adversely impactful on the working of the prestigious institution Visva Bharati. All exemplary steps @MamataOfficial need to be taken to salvage the situation at the earliest," Mr Dhankhar tweeted.