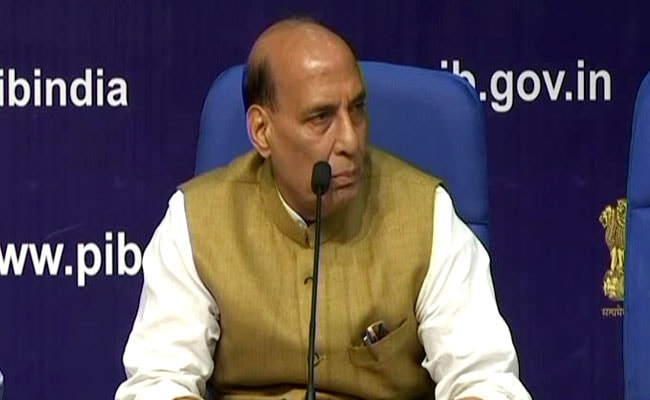 The home ministry said there has been 63 per cent decline in insurgency in the northeast. (File)

New Delhi: The Union home ministry today claimed there has been "visible improvement" in the security scenario in the country since the Narendra Modi government assumed office four years ago.

This was made possible due to sustained action against terrorists and negotiations with extremists groups which abide by the Constitution, it said.

In a booklet, Country First, released a day after the completion of four years of the Modi government, the ministry said special initiatives have been taken to accelerate development in left-wing extremism-hit areas, the northeastern region, Jammu and Kashmir, along the international borders and the coastal areas.

There has been visible improvement in the security scenario due to adoption of a multi-pronged strategy in the last 48 months that include sustained action against terrorists, extremists and insurgents, the booklet claimed.

"The government is negotiating with those extremist groups which abide by the Constitution," it said.

The ministry said there has been 63 per cent decline in insurgency incidents in the northeast, 83 per cent reduction in civilian deaths and 40 per cent decrease in security forces casualty in the region.

However, there was no mention in the booklet about the incidents of violence and casualties of civilians and security personnel in the last four years in Jammu and Kashmir.

According to the data given by Union Minister of State for Home Hansraj Gangaram Ahir in the Lok Sabha on February 6 this year, 201 security personnel and 72 civilians were killed in terrorist violence in Jammu and Kashmir between 2015-17.

Mr Ahir had said there were 342 incidents of violence in Jammu and Kashmir in 2017 alone in which 80 security personnel were killed.

The minister had also said 572 civilians lost their lives and 199 security forces personnel were killed in violence perpetrated by Naxals between 2015-17.

The booklet said 113 sympathisers of the terror group ISIS were arrested by the central and state agencies by working in tandem in last four years.

The ISIS and Ansar-ul-Ummah (AUU) were declared terrorist organisations and Mumbai-based NGO Islamic Research Foundation (IRF) was declared an unlawful association for its alleged links with terror activities, it said.

The ministry claimed the backbone of the Indian Mujahideen has been broken with courts awarding capital punishment to five operatives of the outfit who were convicted for carrying out blasts in Dilsukhnagar, Hyderabad in 2013.

Several top leaders of the United National Liberation Front of Manipur has been awarded rigorous imprisonment of up to 7-10 years for criminal conspiracy to wage war while 12 people were chargesheeted by the NIA in connection with terror-funding cases in J&K, it said.

Promoted
Listen to the latest songs, only on JioSaavn.com
Eighteen activists of the banned terrorist organisation SIMI, including its top leadership, were sentenced to seven years rigorous imprisonment by courts for giving terror training in Kerala, the booklet said.