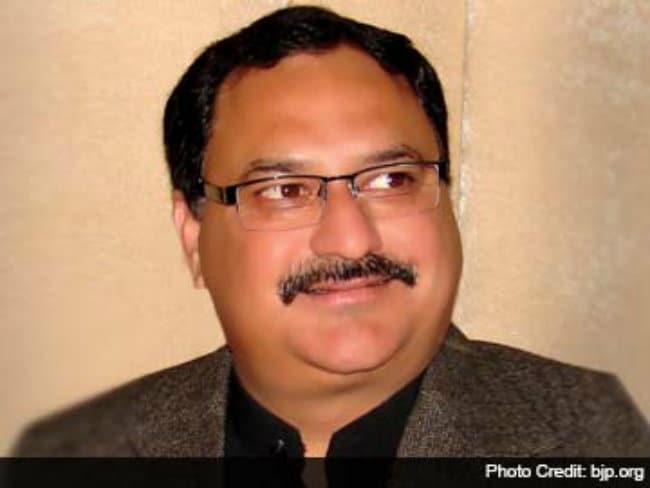 Union Health Minister JP Nadda today said that there has been a visible change in the health indicators of the country and the government is now focused on improving it further.

"There has been a visible change in health indicators in the country. We are going fast on it and will further improve National Health Mission to ensure a good improvement in the health indicators," he said.

Announcing the launch of 'National Deworming Day' to be observed tomorrow, Mr Nadda said the gap between demand and supply still persists in some areas despite hard work of the medical fraternity and more laborious efforts were needed to address the issue.

"Medical fraternity works very hard and their interventions have shown good impact on the society but there has been a gap in demand and supply. We sometimes face difficulties in addressing the demand-supply problem so we want more strength," he said.

"Schemes like Janani Shishu Surakhsa and Janani Suraksha Yojna have contributed to good health of mothers and children and we want to bring more changes," Mr Nadda said.

On the issue of swine flue which has claimed 81 lives in the state this year, Mr Nadda said the Centre has provided all assistance to the state government and was keeping a watch on the matter.

The Health Minister also underlined the importance of public representatives in making programmes of the government successful and said that they should be brought on board while planning and executing schemes.

"We cannot work in isolation. We have to take the society and public representatives along with us. Sometimes there has been a lack of communication but their involvement is important," he said.

Mr Nadda laid stress on quality in health programmes and treatment as well as inter-sectoral approach in working.

"We have to take care of quality. Quality service should be delivered in health and education institutions," he said.

The Union Minister appreciated the scheme of free medicines in Rajasthan.

"Rajasthan has set an example in free medicines," he said.

Free medicines schemes was the ambitious programme of Ashok Gehlot-led former Congress government under which free generic medicines were distributed in government hospitals.

Rajasthan Health Minister Rajendra Rathore said that the state government has taken steps to improve health indicators though a lot of work was still to be done.

"We have ten high focused districts where a lot of work is to be done in the areas of mother mortality rate and child mortality rate," he said.

National Health Mission Director CK Mishra said that National Deworming Day will be observed tomorrow under which tablets and syrup will be administered to children in the age group of 1-19 years in 10 states and 1 Union Territory.

In the first phase of the programme, states of Assam, Bihar, Chhattisgarh, Dadra and Nagar Haveli, Haryana, Karnataka, Maharastra, Madhya Pradesh, Rajasthan, Tamil Nadu and Tripura will be covered tomorrow.

140 million children at risk for parasitic worms in schools and aangawari centers will be administered the tablets and syrup.

"This is a joint programme of the Centre and the state with technical assistance from other organisations. This will decrease the disease burden of children who are at risk of infection," he said.

Promoted
Listen to the latest songs, only on JioSaavn.com
The deworming programme has been launched with the technical assistance of Evidence Action which works with the state governments in Delhi, Bihar, Rajasthan and Madhya
Pradesh.

"Periodic deworming of children together with improved water, sanitation and health education can significantly reduce the prevalence and detrimental health impacts of parasitic worms in children," said Director of India Programmes for Evidence Action's Deworm the World Initiatives, Priya Jha.