Vishwakarma Puja 2018: A Day Dedicated To The Divine Creator

Vishwakarma Puja is celebrated on September 17 in Assam, UP, Karnataka, Bengal, Bihar, Jharkhand, Odisha and Tripura. Vishwakarma Day is also celebrated a day after Diwali, along with Govardhan Puja. 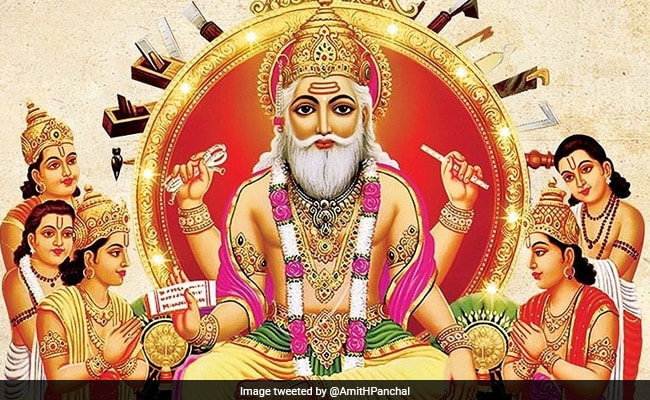 Vishwakarma Puja is celebrated on September 17.

Vishwakarma Day, also known as Vishwakarma Jayanti or Vishwakarma Puja, is a day of celebration for Vishwakarma, a Hindu god. Vishwakarma is considered as swayambhu and creator of the world. He is the deity of the creative power that holds the universe together and is considered to be the original creator, architect, divine engineer of the universe. The divine creator constructed the holy city of Dwarka where Lord Krishna ruled. In Rig Veda, Vishwakarma is also called the divine carpenter as he was the creator of many extraordinary weapons for the gods. Vishwakarma Puja is generally celebrated every year on September 17 or 18, the last day of the Indian Bhado month, in Assam, Uttar Pradesh, Karnataka, Bengal, Bihar, Jharkhand, Odisha and Tripura. Vishwakarma puja is also celebrated a day after Diwali, along with Govardhan Puja in October-November.

Vishwakarma Puja is observed in factories and industrial areas. Lord Vishwakarma is worshiped by not just the engineering and architectural community but by artisans, craftsmen, mechanics, smiths, welders, industrial workers, factory workers and others and they refrain from using tools on this day.

The workers pray for a better future, safe working conditions and success in their respective fields on Vishwakarma Puja.

The West Bengal government has declared half-day holiday on the occasion of the Vishwakarma Puja.

However, the offices of the registrar of assurances, the collector of stamp revenue and the state beverages corporation limited would not come under the purview of the order.