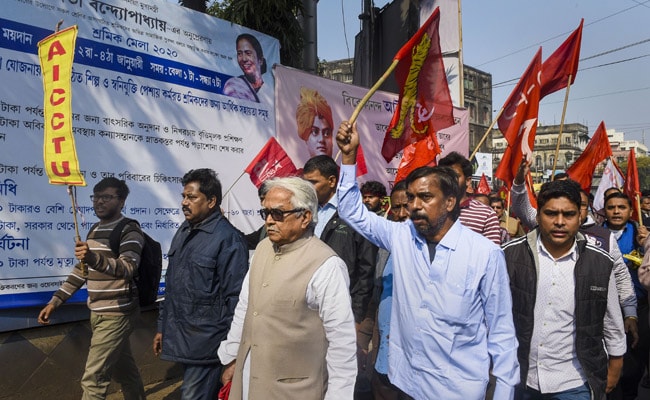 A 24-hour strike by central trade unions in West Bengal on Wednesday was marked by incidents of violence and arson, blocking of railway tracks and roads by protestors trying to enforce the shutdown, officials said.

Railway tracks and roads were blocked in various parts of the state affecting normal life.

West Bengal Chief Minister Mamata Banerjee, who had opposed the strike call, blamed the central trade unions, the Left Front and the Congress for the violence.

The CPI(M) and Congress was quick to return fire, accusing Ms Banerjee of instigating violence. They claimed that Trinamool Congress cadres and police personnel had indulged in violence in the state.

Both the parties pointed to a unverified video clip, that went viral, showing people in police uniforms vandalizing buses.

Malda police superintendent Alok Rajoria said the district police has received the video clip and investigation is on.

"If at all any police personnel is found to be involved, then necessary action will be taken," he assured.

Besides Malda, violence and arson was reported in other districts of the state.

In East Midnapore, stones were hurled at buses and protesters clashed with the police, who made several arrests, officials said.

In Kolkata, government buses plied normally but the number of private buses was fewer. Metro services were normal and auto-rickshaws and taxis were also seen on the roads.

Heavy police deployment was seen in several areas and important crossings, including in Tollygunge, Behala, Esplanade, Park Circus and Shyambazar.