Ajay Pandit, who was a Congress member and sarpanchin Anantnag district, was shot dead by terrorists in his native village on Monday, the police said. 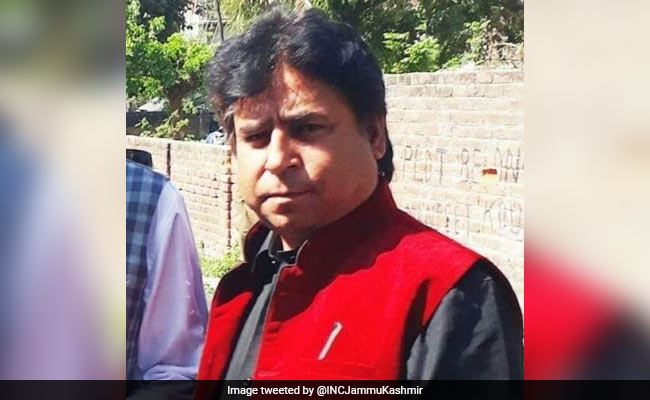 Ajay Pandit (40), who was a Congress member and sarpanch in Anantnag district. (Representational)

A Kashmiri Pandit sarpanch (village head), who was shot dead by terrorists in Jammu and Kashmir's Anantnag on Monday, was cremated in the presence of scores of mourners, including leaders of the Congress, the BJP and other organisations.

A number of people, who gathered at the cremation ground for the last rites of Ajay Pandit ignoring the COVID-19 restrictions, shouted slogans against Pakistan and terror outfit The Resistance Front (TRF).

Ajay Pandit (40), who was a Congress member and sarpanch in Anantnag district, was shot dead by terrorists in his native village at around 6 PM on Monday, police had said.

Some members of the Kashmiri Pandit community also protested against the alleged failure of authorities to provide security to the panchayat member, despite the threats issued by the terror outfit.

It was the first such killing of a minority community member in 16 years, Kashmir Pandit outfits said, and alleged that it was an attempt to create a "fear psychosis" among the community members as was done in the Valley in 1990s.

Wrapped in the tricolour, Ajay Pandit's body was taken to his Jammu home from Kashmir early this morning, officials said.

It was then taken to the cremation ground, where a few hundred people gathered to pay their last respects.

A section of people expressed their anger that no representative of the Jammu and Kashmir government was present.

Several Union minister, leaders of various parties, including the Congress, the BJP, the National Conference and the PDP, as well as Kashmiri Pandit organisations have strongly condemned the killing.

Jammu and Kashmir Lieutenant Governor GC Murmu on Tuesday said those behind the incident are "enemies of humanity."

Calling it a cowardly act, he said, "an attack on any public representative is an attack on the democratic setup".

The LG said that he has directed authorities to spare no efforts in bringing the culprits to justice.

Congress leader Rahul Gandhi said violence will never win in Kashmir, as he condoled the death.

BJP state president Ravinder Raina alleged that the terrorists had targeted the sarpanch as they were rattled by the killing of 80 terrorists including 24 top commanders by the security forces in recent months. "Those involved will be eliminated soon", he said.

Congress leader Ahmed Mir hit out at the government.

"Despite several representations, the government failed to provide him security. He was left to be killed by terrorists. The government is responsible for it," he told reporters.

Kashmiri Pandit groups urged the central government to provide security to their community and other minorities in Kashmir.

"It is a planned attack by Islamic terrorists to target the minority Kashmiri Pandit community in Kashmir valley to trigger fear psychosis among them like they did in 1990s. We condemn the killing of a Kashmir Pandit," All Party Migrant Cooperation Committee (APMCC) Chairman Vinod Pandita said.

He said several terrorist outfits have threatened to target Kashmiri Pandits (KPs) if they return.

"This is a clear threat to the KPs by terrorists and their overground workers... Nothing has changed for KPs since 1990 in Kashmir," Vinod Pandita said.

He demanded security for all the members of the panchayat in Jammu and Kashmir.

The scrapping of Article 370 generated a hope among minority Kashmiri Pandits that they will be able to return to Kashmir in a separate secured township, but this killing was planned to stop their return and rehabilitation in the valley, All State Kashmiri Pandit Conference (ASKPC) general secretary TK Bhat said.

The All Jammu and Kashmir Panchayat Conference (AJKPC) said such attacks would not deter it from strengthening democracy at the grassroots level of the Union Territory.

The AJKPC reiterated its demand for security to its members.

"Pandita was a vice-president of AJKPC, Jammu zone, and had played a great role in strengthening the organisation. We see his killing as an attack on democracy and a direct fallout of the frustration among the terror ranks due to back-to-back successful operations which resulted in the killing of nine militants in the past two days in Shopian district," AJKPC president Anil Sharma said.

"We have lost 18 members to terrorist attacks so far but we will not succumb and will continue to work for strengthening democracy at the grassroots level in Jammu and Kashmir," he added.

Mr Sharma urged the government to provide compensation of Rs 20 lakh to the relative of the village head who died.