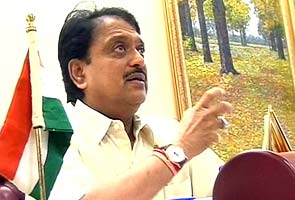 Mumbai: As Vilasrao Deshmukh took charge of his new ministry - Rural Development - in his home state of Maharashtra, farmers protested in the Vidarbha district. In the last decade, this part of the country has become synonymous of farmer suicides driven by debt.

For much of this period of hellish descent, Deshmukh was Chief Minister of Maharashtra. For years, this region has believed Deshmukh has not been on their side.

He was Chief Minister in 2006 when his personal assistant made phoned the local police station in Khamgaon, forbidding a case from being registered Gokulchand Sananda, a moneylender, whose son was a Congress MLA.

Last month, the Supreme Court found Deshmukh guilty of trying to shield Sananda, and fined the state government 10 lakhs. It also observed, "According to the National Crime Records Bureau... close to two lakh farmers committed suicides in India between 1997 and 2008, the largest sustained wave of suicides ever recorded in human history. Two-thirds of the suicides are in five states, including Maharashtra. The Vidarbha region is today the worst place in the country for farmers."

In Vidarbha, farmers like Ashok Bhutada believe the government has been grossly insensitive in giving the Rural Development portfolio to Deshmukh. "Instead of being removed, he has been promoted. What sort of justice is this?'' he asks.

Deshmukh said, "I don't want to comment on the Supreme Court case. This is one isolated incident, and it cannot be connected to other cases."

In 2007, Deshmukh made a controversial remark accusing farmers of soaking cotton in water to increase its weight and cheat traders. He later said he was quoted out of context.