"Will Do Something Like Telangana": Supreme Court On Vikas Dubey Case

Vikas Dubey, who was the main accused in a brutal attack that left eight cops dead and seven others injured, was shot dead Friday as he tried to escape police custody following a car accident

The Supreme Court may appoint a panel, to be headed by a retired judge, to probe Kanpur Police's killing of Uttar Pradesh gangster Vikas Dubey and his aides last week, as well as his massacre of eight cops a few days earlier.

Responding to PILs asking for a court-monitored CBI or NIA probe into both incidents, the court gave the UP government till Thursday to tell the court "what kind of committee" it wanted.

The case will be taken up next on Monday, July 20.

"We will do something (like) what we did in the Telangana case. Tell us what kind of committee you want," the Chief Justice of India said, referring to the encounter killing of four men accused of the rape and murder of a 27-year-old woman.

Telangana Police said the four, who were in custody, attempted to escape by attacked armed cops with sticks and stones before snatching their weapons, leaving them with no option but to shoot them dead.

Shortly after the top court constituted a panel headed by retired Supreme Court judge Justice VS Sirpurkar to probe the matter. The panel has yet to submit its report because of the coronavirus outbreak.

"Please give me time. We have taken cognisance of the matter (but) too many facts are in the public domain. Let me place our facts from the UP government before the court," he said Tuesday.

Vikas Dubey, who was the main accused in a brutal attack that left eight cops dead and seven others injured, was shot dead Friday as he tried to escape police custody following a car accident.

The police said Dubey, who was being transported to Kanpur after his arrest in neighbouring Madhya Pradesh, tried to escape after the vehicle he was in met with an accident. 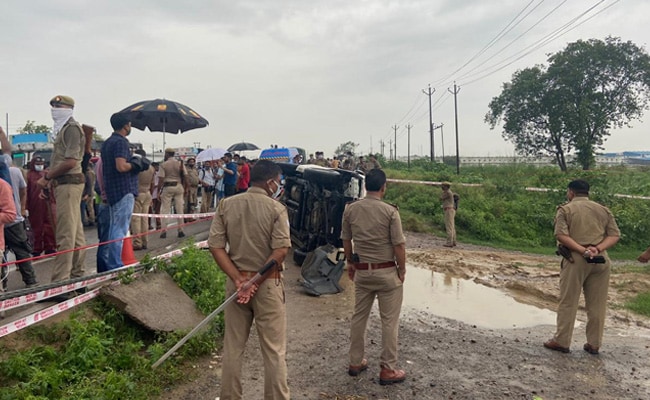 In a statement that had echoes of the Telangana encounter, the cops said Dubey snatched a gun from a cop. Attempts were made to get him to surrender but he fired at the cops, forcing them to retaliate.

However, questions have emerged over the police's version of events that led to Dubey's death. Videos and witness accounts have underlined the questions that, so far, have no answers from the police.

The UP government has already appointed an independent one-member commission to probe the incident; it will consist of a retired judge and must submit a report within two months.

One of the PILs heard by the Supreme Court today had been filed by Ghanshyam Upadhyay, a Mumbai-based lawyer, hours before Vikas Dubey died in the encounter.

The PIL sought a court-monitored probe into the killing of five of the gangster's associates. Presciently, it had also sought protection for Dubey, fearing that he might be killed in an encounter.

UP gangster Vikas Dubey faced 60 criminal cases, including 20 cases of murder and attempt to murder

The second, filed by Anoop Prakash Awasthi, wants the top court to direct and oversee a CBI (Central Bureau of Investigation) or NIA (National Investigation Agency) probe into the nexus between cops and criminals that led to the deaths of the eight cops.

Ongoing inquiries into the bloodbath at Bikru village near Kanpur have suggested that several cops were part of Dubey's "deep-rooted" network.

The officer in-charge of the Chaubeypur Police Station, which has jurisdiction over the village, was arrested last week. A sub inspector from the same station was also arrested. In addition, four more cops from the station have been suspended and at least 30 others are being investigated.

A three-judge bench of the Supreme Court, consisting of the Chief Justice and Justices R Subhash Reddy and AS Bopanna will hear the petitions.