On the run since he organized the massacre of eight policemen in Kanpur last Friday, Vikas Dubey was arrested yesterday at a temple in Ujjain, Madhya Pradesh.

Reports suggest the car that had Vikas Dubey overturned and he tried to escape.

Gangster Vikas Dubey was shot dead while trying to escape after a car accident in Uttar Pradesh, the police said on Friday morning, a day after his dramatic arrest in Madhya Pradesh. Vikas Dubey snatched the gun of a policeman and opened fire, the police said, asserting that they had tried to catch him alive.

Just an hour short of Kanpur, the car in which Vikas Dubey was being taken - one of three in the police convoy -- overturned on the wet highway and he tried to escape, the police said. He was shot dead, like many of his accomplices who, according to the police, had also tried to escape from custody. According to the Special Task Force, which was escorting the criminal, the car flipped after taking a sudden turn to avoid a herd of cattle.

"Vikas Dubey was injured and taken to hospital. He died during treatment," said the statement. He had three bullet wounds to the chest and one to his arm. 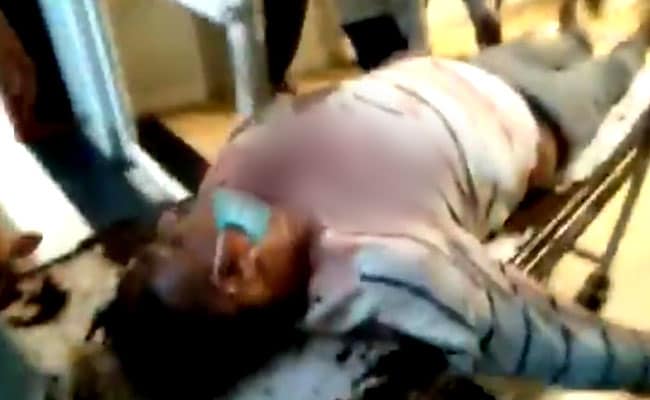 Vikas Dubey, in his 50s, had over 60 criminal cases against him, including murder.

On the run since he organized the massacre of policemen at his village in Kanpur last Friday, Vikas Dubey was arrested yesterday at the famous Mahakal temple in Ujjain, Madhya Pradesh. He was spotted by temple security guards when he bought prasad and entered the temple. When he was confronted by the guards, he lashed out and was taken to the police. "Main Vikas Dubey hoon, Kanpur wala! (I am Vikas Dubey, the Kanpur guy)," he burst out, held by several Madhya Pradesh policemen.

The manner of his arrest at a very public place and far from UP led to speculation that he had turned himself in at a time and place of his choosing.

Dubey had driven from Kanpur to Faridabad in Haryana, where he escaped from a hotel just before the police arrived. He then drove to Kota in Rajasthan and finally to Madhya Pradesh in a 1,500-km journey.

Senior UP police officer Mohit Agarwal had said: "We had caught many of his associates and a few were killed. So definitely he was trying to save his life and on the run."

As visuals of Dubey's bloodstained body in a hospital emerged, opposition leaders, lawyers and activists alleged that police had killed Dubey to prevent him revealing his links with powerful people.

A petition filed in the Supreme Court last night had asked for security for the gangster and a CBI investigation into a series of encounter killings.

Five of Dubey's aides had been killed in the past few days. Two of them were shot dead in encounters just hours before his arrest.

One of them, Prabhat, was arrested on Wednesday from the Faridabad hotel where Dubey had been sighted. On the way to UP, he allegedly snatched a pistol from a policeman trying to fix a flat tyre and tried to run away when he was shot, the police said.

Dubey, in his 50s, had over 60 criminal cases against him, including murder, kidnapping and extortion. His alleged links with the police and politicians helped him stay out of jail for years. Former Chief Minister Akhilesh Yadav suggested in a tweet that his killing helped the UP government protect secrets that would have come out on the politician-criminal nexus.

On Friday last, a large team of policemen who went to Dubey's Bikru village to arrest him in an attempted murder case was caught by surprise when there was indiscriminate firing from rooftops. Eight policemen were killed in the ambush set up after the gangster was tipped off by a local police inspector. Dubey escaped with many of his men after the massacre.

The UP administration tore down Dubey's house and launched a massive hunt for him. Two policemen were arrested for allegedly helping him and over 60 local cops shunted out. Dubey's wife and son were found in Lucknow and were taken for questioning last evening.