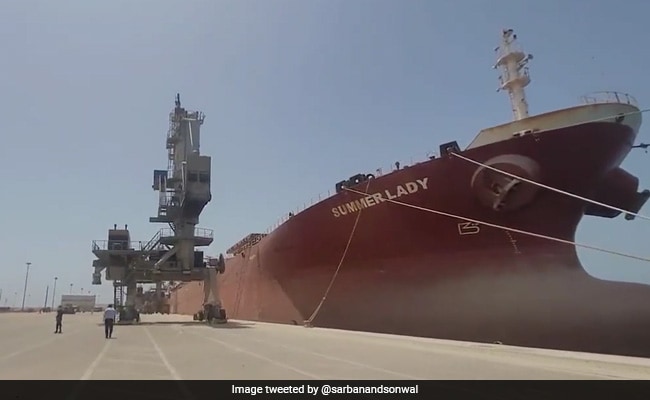 Sarbananda Sonowal, the Shipping and Waterways Minister, inspected a massive port operated by India in Iran.

Iran's Chabahar Port is a much-needed project for India to get sea access to landlocked regions. This facility has emerged as a commercial transit hub for the region, and a more economical and stable route for landlocked countries to reach India and the global market.

"Visited and inspected the Shahid Beheshti port in Chabahar, Iran. The port is operated by India and forms an important part of our bilateral relations led by the vision of Prime Minister Narendra Modi," Mr Sonowal tweeted.

"India is committed to the development of Chabahar Port. It is an important link of the International North South Transport Corridor, which opens up Central Asia to the markets of SE Asia and ASEAN," he said.

"Since India has assumed operations of Shahid Beheshti Port at Chabahar, it has handled over 4.8 million tons of bulk cargo. The port has received shipments from Australia, B'desh, Brazil, Germany, Oman, Romania, Russia, Thailand, UAE, Ukraine and Uzbekistan among other nations," Mr Sonowal said.

Visited and inspected the Shahid Beheshti port in Chabahar, Iran. The port is operated by India and forms an important part of our bilateral relations led by the vision of Hon'ble PM Shri @narendramodi ji. @MEAIndia@India_in_Iran@PIB_Indiapic.twitter.com/S4IYeFN5mX

He also shared a video of the big port, showing the wide access roads and cranes used to lift and unload shipping containers.

Mr Sonowal today handed over six mobile harbour cranes to the port authorities, which will improve operations at the Shahid Beheshti Port and lead to further development of Chabahar Port.

In 2015, India agreed to help develop Iran's Chabahar Port and an associated railway that would enable India to trade with landlocked regions, unimpeded by Pakistan.

The Chabahar port is easily accessible from India's western coast and is increasingly seen as a counter to Pakistan's Gwadar Port located at distance of around 80 km from Chabahar.