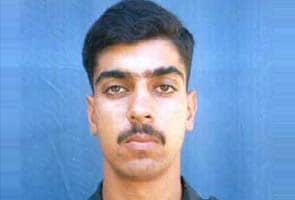 New Delhi: A video taken during a Pakistani army function reportedly shows a soldier sharing details of an encounter in which Captain Saurabh Kalia, and five of his platoon members, were killed in 1999 just before the Kargil war broke out. The video clip has been uploaded on YouTube.

Captain Kalia and other soldiers were captured by Pakistan and allegedly tortured brutally during the war that lasted from May to July in 1999. The 23-year-old from the 4 Jat Regiment was the first Indian Army officer to observe and report the large-scale intrusion by the Pakistani Army into the Indian side of the Line of Control in the Kargil sector of Jammu and Kashmir. He and the five others were captured on May 15, 1999 and were in captivity for more than 20 days.

When their bodies were handed over to India, the autopsy reports revealed extreme torture including cigarette burns, ear drums pierced with hot iron rods and amputated limbs.

"The Army has admitted to the encounter in mid-May 1999. All through these years, right from their ex-President Musharraf to any of their Generals, they have never admitted that this incident happened," said Captain Saurabh Kalia's father, NK Kalia.

NK Kalia had earlier said that though Pakistan's handling of his son violates the international convention on the treatment of prisoners of war, the Indian government has been apathetic in not raising the case with Pakistan.

Promoted
Listen to the latest songs, only on JioSaavn.com
Captain Kalia's father said that he had first approached the Indian Defence Ministry for help, which said his son's case had been referred to the Prime Minister's Office, which in turn said the matter was being studied by the External Affairs Ministry.